To share your memory on the wall of William Wallis, sign in using one of the following options:

Bill was born on July 10, 1931, in Benton Harbor, to Merle & Ella (Yoder Hutchinson) Wallis. He graduated from St. Joseph High School in 1949 where he was a standout player on the football team while also playing clarinet in the band. Shortly after graduation, he enlisted in the United States Air Force where he proudly served our country as a radio mechanic until his honorable discharge in 1953. On May 10, 1958, Bill married the love of his life, Juanita Brunke, in St. Joseph. After his Air Force service, Bill began a successful career as a Field Service Technician with the National Cash Register Corporation until his retirement in 1993. For many years, Bill enjoyed playing golf at Pebblewood Country Club and was an avid bowler at both Kelly’s Bowl and Lakeshore Lanes. One of his proudest moments was when he was inducted into the Blossomland USBC Bowling Association Hall of Fame for Meritorious Service in 2013. Bill was an incredible man who was always willing to lend a hand whenever needed, and he will truly be missed by all who knew him.

Bill is survived by his loving wife of 62 years, Juanita; sons, Robb (Tina) Wallis of Charlestown, IN and David (Jami) Wallis of Montgomery, IL; 11 grandchildren; 13 great-grandchildren; sister, Cheryl (Larry) Tercha; and many nieces, nephews, and cousins. He was preceded in death by his parents, Merle & Ella; and sister, Marilyn Dumke.

In lieu of flowers, the family humbly requests that you consider a contribution in his name to the Stevensville American Legion Post 568, honoring his 38 years as a member. Post 568 is at 3093 Johnson Rd. Stevensville, MI, 49127.
Read Less

Print
A private family service will be held at a later date. In lieu of flowers, the family humbly requests that you consider a contribution in his name to the Stevensville American Legion Post 568, honoring his 38 years as a member. Post 568 is at 3093 Johnson Rd. Stevensville, MI, 49127.

Posted Jul 19, 2020 at 10:44am
Cheryl and family, I am so sorry for your great loss.
Although I didn’t know your brother well, as I was only 4 or 5 years old, I’ll never forget him coming home from the service. We were eating dinner on Hawthorn Ave when Dad saw Bill in uniform carrying his huge duffle bag. Dad jumped up from the table and ran out to the car to give Bill the short ride home.
When Dad got home he told us that Bill had taken the South Shore bus to Lakeshore Dr and Hawthorn and started walking home. Dad said no service man should ever have to come home unescorted without our thanks.
That memory was etched in my hear forever.
My healing prayers to you all.
Warmly,
Chris Dwan Preston
Comment Share
Share via:
DK

Posted Jul 15, 2020 at 05:21pm
I am so sorry for your loss Aunt Juanita. Uncle Bill would light up the room with his smile, I will surely miss him.

We were so sad to hear of Bill's passing. He was a great man, husband, father, grandfather and the best brother-in-law. You two made the perfect couple . Al will miss his chats with Bill about golf games and I will miss his smile. Please know that you are in our thoughts and prayers at this time. 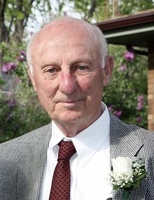