To share your memory on the wall of William Sinclair, sign in using one of the following options:

Print
William (Bill) Sinclair passed away Tuesday, February 2, 2021, with his daughters at his side. He was born February 27, 1934 to William and Elizabeth (Smyth) Sinclair in Detroit, Michigan.

He graduated from Cooley High School in Detroit ... Read More
William (Bill) Sinclair passed away Tuesday, February 2, 2021, with his daughters at his side. He was born February 27, 1934 to William and Elizabeth (Smyth) Sinclair in Detroit, Michigan.

He graduated from Cooley High School in Detroit where he played football and ran track, then went on to serve in the United States Army. He returned to Detroit and worked during the day while attending college at night. Even with this busy schedule, he managed to fall in love.

He met Hilda Archer at a St. Patrick’s Day dinner. They began dating, but Hilda told him the relationship wasn’t going to go anywhere because she would be returning to Ireland. They were engaged by July and married the following year. Their love kept her here in the United States and lasted until Hilda’s passing 56 years later.

Bill graduated from Lawrence Institute of Technology with a degree in Civil Engineering. He worked as a surveyor and city engineer before settling into his primary career as a City Manager. He spent 13 years in Rochester, Michigan, and then became City Manager in St. Joseph, Michigan for the next 18 years. Even after he retired, his management skills were in demand as he filled more than half a dozen interim positions for different cities and villages in Southwest Michigan. Bill’s career was one of distinction, as he was appointed to a number of industry boards and earned many rewards and much recognition.

Bill was a member of Rotary, the Masonic Temple, and First Congregational Church. He offered his services in many volunteer capacities throughout his life. In his spare time, you could catch him on the golf course, or playing games with his family. He particularly enjoyed a good game of backgammon, cribbage, gin, or darts with Hilda.

Bill was preceded in death by his parents, his wife Hilda (2019), his son Andrew (2012), and his granddaughter Paige (2013). He is survived by his daughters, Laura (Michael) Bos and Beth (Troy) Ayotte, both of South Haven, Michigan; grandchildren Kyle and Erin Bos and Jack and Brett Ayotte, all of South Haven; and great-grandson Liam Ellis of Temperance, Michigan. He is also survived by his sisters Peggy Mills (Loudon, Tennessee) and Joan Fudem (Roseville, California) and many nieces and nephews.

Memorial contributions may be made to First Congregational Church, South Haven, Michigan. A private memorial service will be held at a later date.
Read Less

Receive notifications about information and event scheduling for William

Posted Feb 12, 2021 at 03:51pm
Laura and Beth, I am so sorry, your Dad was a very special man. Actually Hilda, Bill and Andrew were all very special people, I know they are missed.
Comment Share
Share via:
JS

Posted Feb 07, 2021 at 10:26am
It was always a pleasure to be in Hilda's and Bill's presence. They will be greatly missed. My prayers go out to his family. God bless you.
Comment Share
Share via:
D

Posted Feb 05, 2021 at 11:47am
We have been friends with Bill and Hilda for 55 years. One of our favorite memories involved our family trip to St. Joe. Our 3 year old daughter, Tricia fell off the pier and into Lake Michigan. Bill was the first to jump in and save her! He will be missed. Dave and Diana Donegan.
Comment Share
Share via:
WP

Posted Feb 04, 2021 at 02:59pm
Laura, Beth and families, I was so sorry to hear of the passing of your dad. My thoughts and prayers are with you at this time of sorrow. May you find comfort in your memories of Bill. 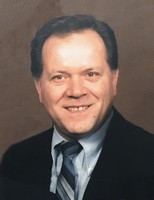