To share your memory on the wall of William Mohr, sign in using one of the following options:

Dave was born August 23, 1928 in South Haven, Michigan where he grew up. The son of LC Mohr, the Superintendent of Schools, and Mabel Wegner Mohr, a teacher, Dave graduated from South Haven High School and earned his bachelors, masters and doctorate degrees in Chemical Engineering from MIT, where he was in Army ROTC, played tenor sax and sang in the men's octet, the Logarhythms. After college he served in the US Army’s Chemical Corps during the Korean War, though he was never deployed to Korea. After discharge, Dave went to work at DuPont where a colleague and his wife introduced Dave to Elizabeth (Liz) Heaton. Within a year Dave and Liz were married and were blessed with 60 years together.

Soon after they were married, Dave and Liz moved back to Southwestern Michigan to start their family and a couple of businesses — Instracon and Die-Cast Electronics. Both businesses helped area industry install and maintain electronic instruments and control systems. Dave’s efforts helped his clients use new technologies, remain competitive and keep jobs in Southwestern Michigan.


Dave was a devoted and loving husband and father supporting his wife and kids in all their pursuits and encouraging them to “do their own thing”. He was generous with his time and loved helping others build or fix things and advance their ideas and passions. He had a brilliant mind, loved all puzzles, and did extensive research on an alternative approach to musical tuning known as Just Intonation. Friday lunches were at DiMaggio’s staying connected with a group of old friends and their faithful waitress.

In addition to church choirs, Dave’s love of singing was expressed in barbershop quartet groups. He sang with the local chorus for 40+ years and with many quartets, including most recently his dear friends, the Kor Vets.

Dave was preceded in death by his parents, his stepmother, Louisa Durham, his brother C. Michael (Mike) Mohr, a niece, Christine, and a granddaughter, Elizabeth.

Remember Dave by enjoying time with family, savoring a fruit pie, and singing, especially singing in harmony with others.

A memorial service will be announced at a later date at the First Congregational Church of St. Joseph. Those wishing to sign Dave’s Memory Book online may do so at www.starks-menchinger.com.
Read Less

Posted Mar 10, 2020 at 10:29am
Please know you've been in my thoughts and prayers. Mr. Mohr (call me Dave) was a gem. He was such a great friend to my Dad, who thought the world of him. I so loved talking to him. I think he was the most intelligent person I have ever known and one of the kindest. Hugs and love to the whole family.
Comment Share
Share via:
EK

Posted Feb 21, 2020 at 04:11pm
Dearest Liz & Family,
We were very sad to hear of Dave's passing. I still remember fondly the night he showed up at the back door and insisted that Becky and I join him in the bean bag in front of the TV. He introduced us to the Muppet Show that night. My life was profoundly changed as a result of my Godfather. May God comfort you all in your loss! I know that he is in great hands!
All our love, Beverly Ketchel & Ginny Page
Comment Share
Share via:
SL

Posted Feb 15, 2020 at 09:48pm
I have many Barbershop memories of Dave when my husband Steve was also in the Fruitbelt Chapter, yes, "the good ole days". MY Sympayhy to you Liz and your family. Sue Lake
Comment Share
Share via:
DL

Posted Feb 08, 2020 at 02:05pm
Two weeks ago I was there when he sang a tag with his quartet, the KorVets. He looked so happy. He was very weak but he took time to talk to me in the lounge. I will miss Dave. He was a very kind and loving man. Dave loved barbershop. I am so thankful he was my friend. Praying for Liz and family.
Comment Share
Share via: 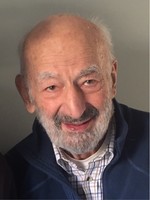