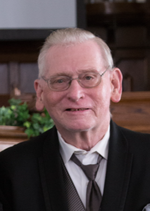 Thomas was born May 6th, 1935 in Michigan City, IN to Alexander & Lulu (Hansen) Tomsheck. On June 28th, 1958 he married Sharon Fitzcharles in Benton Harbor. Thomas worked as a Die Caster for Dynac Corporation for many years. He was a member of the Benton Harbor Moose Lodge and in his spare time, enjoyed fishing and bowling.

Arrangements have been entrusted to Starks & Menchinger Chapel. Memorials may be made to the Tomsheck family in c/o Sharon Tomsheck. Those wishing to share a memory of Thomas online may do so at www.starks-menchinger.com