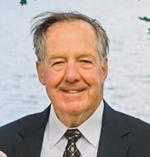 Thomas Emmett “Tom” Hollowell, 81, of St. Joseph, passed away on Friday, October 30, 2020, at his home. Arrangements have been entrusted to Starks & Menchinger Chapel, St. Joseph, MI. A Celebration of Life Service will be held at a later date. Burial will be at Kerr Cemetery in Mineral Ridge, OH. Memorial contributions may be made to First Congregational United Church of Christ, https://www.fccstjoseph.org/giving/, or Habitat for Humanity, https://www.habitat.org/donate/?keyword=header-single-gift. Those wishing to leave an online condolence may do so at www.starks-menchinger.com.

Tom was born on December 10, 1938, in Youngstown, OH, to William & Pearl (Gould) Hollowell. He graduated from Austintown Fitch High School in 1956. He continued his education by graduating with a Bachelor’s Degree in Mechanical Engineering from Youngstown State University and a Master’s Degree in Mechanical Engineering & MBA from Rensselaer Polytechnic Institute. On February 8, 1958, Tom married Barbara Seifert. They were happily married for nearly 34 years before she passed away in 1992. On July 27, 1993, Tom married Beverly (Rahn) Linn at First Congregational U.C.C.

Tom began his engineering career at Hamilton Standard in Connecticut, where he worked on the Apollo Lunar Landing Module. He later worked in the Nuclear Power Division at Combustion Engineering where he had the opportunity to do research at the Institute for Atomic Energy in Halden, Norway. Tom made one last job transition to Consumer’s Energy, first in Jackson and then ending his career at Palisades Nuclear Plant, retiring on April 14, 2000. After retirement, Tom maintained free lance work as an engineer and licensed builder.

Always willing to help when needed, Tom volunteered much of his time working with Jimmy Carter & Habitat for Humanity in locations such as Mexico, India and Benton Harbor. He also donated his time as a Stephen Minister at Stephen Ministries and was a former lay-Chaplin for Lakeland Hospital. Tom was a proud member of First Congregational U.C.C., St. Joseph Rotary, Econ Club, and ARRL (American Radio Relay League - a group that is involved with operating HAM radios). Tom had a huge passion for being outdoors. He loved sailing on his boat, all types of skiing, hiking, playing tennis & golf, and orienteering – using a map and compass to navigate the wilderness.