To share your memory on the wall of Thomas Hollowell, sign in using one of the following options:

Tom was born on December 10, 1938, in Youngstown, OH, to William & Pearl (Gould) Hollowell. He graduated from Austintown Fitch High School in 1956. He continued his education by graduating with a Bachelor’s Degree in Mechanical Engineering from Youngstown State University and a Master’s Degree in Mechanical Engineering & MBA from Rensselaer Polytechnic Institute. On February 8, 1958, Tom married Barbara Seifert. They were happily married for nearly 34 years before she passed away in 1992. On July 27, 1993, Tom married Beverly (Rahn) Linn at First Congregational U.C.C.

Tom began his engineering career at Hamilton Standard in Connecticut, where he worked on the Apollo Lunar Landing Module. He later worked in the Nuclear Power Division at Combustion Engineering where he had the opportunity to do research at the Institute for Atomic Energy in Halden, Norway. Tom made one last job transition to Consumer’s Energy, first in Jackson and then ending his career at Palisades Nuclear Plant, retiring on April 14, 2000. After retirement, Tom maintained free lance work as an engineer and licensed builder.

Always willing to help when needed, Tom volunteered much of his time working with Jimmy Carter & Habitat for Humanity in locations such as Mexico, India and Benton Harbor. He also donated his time as a Stephen Minister at Stephen Ministries and was a former lay-Chaplin for Lakeland Hospital. Tom was a proud member of First Congregational U.C.C., St. Joseph Rotary, Econ Club, and ARRL (American Radio Relay League - a group that is involved with operating HAM radios). Tom had a huge passion for being outdoors. He loved sailing on his boat, all types of skiing, hiking, playing tennis & golf, and orienteering – using a map and compass to navigate the wilderness.

Print
A Celebration of Life Service will be held at a later date. Burial will be at Kerr Cemetery in Mineral Ridge, OH. Memorial contributions may be made to First Congregational United Church of Christ, https://www.fccstjoseph.org/giving/, or Habitat for Humanity, https://www.habitat.org/donate/?keyword=header-single-gift.

We encourage you to share your most beloved memories of Thomas here, so that the family and other loved ones can always see it. You can upload cherished photographs, or share your favorite stories, and can even comment on those shared by others.

Posted Nov 06, 2020 at 09:17pm
I hadn’t seen Tom in a few years, the last time being at a old retired engineer guys from Palisades lunch. He was always upbeat, dependable, and one of the nicest and best and sharpest people in the room but so quiet and unassuming. Lou Gibson said it well. Tom solved problems, likely most people never knew were being worked on, or that they were resolved by Tom.
I am saddened for his family's loss.
Comment Share
Share via:
PV

Posted Nov 06, 2020 at 01:11pm
Emma,
What a lovely tribute to your Grandpa. Sounds like quite a guy. Keep you and your family in my thoughts and prayers during this time.

Posted Nov 03, 2020 at 03:42pm
I first met Tom many years ago when I hired him to work with us at Consumers energy in Jackson. He was a remarkable, talented, outstanding engineer. Quiet, with a knowing smile that said, "I know how we can resolve this question". He was the by far the best talent that we had. Respected by all who knew him. It is with sadness that he is no longer with us. He enjoyed life to the fullest.
Louis Gibson
Comment Share
Share via:
MS

Posted Nov 03, 2020 at 08:34am
I met Tom through Bev, his second wife. I always admired his gentleness and his willingness to help others. He was truly a man of God and demonstrated this through all of his acts of kindness. My sympathies to his families. Marla Schamp
Comment Share
Share via:
DJ

Posted Nov 02, 2020 at 09:00pm
I pray that in the midst of your sorrow you find comfort in all the joyful memories shared. With our love and deepest sympathy as we remember Tom's gentle nature and love for the outdoors. Dennis & Wendy
Comment Share
Share via: 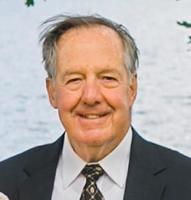