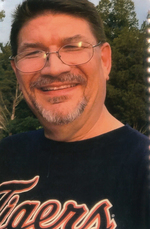 On June 6, 2020, Steven Roy Eagle, 54, was asked by God to come home to spend eternity with family and friends who were invited before him.

Steve was welcomed into this world by his loving parents, Elmer “Larry” Eagle, and Judith “Judy” Eagle on August 21, 1965.

Steve’s heart was truly with his soulmate Nancy Mead of Baroda, along with her two children Lexi and Alex, who also looked to Steve as someone special in their lives. Steve was very thankful to God for giving him the opportunity to have them in his life. Steve always made sure that the ones dearest and closest to him were doing well, a trait he received from his mother. Steve taught the same values and life lessons he learned from his father Larry, to all of his children. He wanted people to be able to learn and live from the mistakes he made, trying to let people know that they are special to him and he truly wanted everyone to be happy. Steve has friends and family all across our nation, and was loved and respected by all who knew him.

Steve’s life began Royal Oak, Michigan. After living in Detroit area until he was 10, he moved to Sault Ste Marie, MI, where he was introduced to the grocery business. Living in such a great place to grow up, and start his journey to the man that he became, eventually landing in Southwest Michigan in 1979.

After graduating from Lakeshore High School in 1983, he continued on to study at Western Michigan University. His professional career had some different paths. Steve remained in the grocery business with his family until 1998, when Steve made the decision to open a sandwich shop by the name of Mr. Pita in St. Joseph. Wanting to grow, Steve decided to take that business to the downtown Chicago area. As Steve’s life was circling back to the area, he ended up returning to the grocery business as the owner of Save A Lot grocery store in Niles. Some of Steve’s favorite things in life were his friends, golf, and of course music! Let there be songs to fill the air! We love you Steve, see you on the back 9!