To share your memory on the wall of Ruby Reber, sign in using one of the following options:

Provide comfort for the family of Ruby Reber with a meaningful gesture of sympathy.

Ruby was born Aug. 23, 1926, to Clovis L. and Margaret E. (Vieritz) Boyersmith in Meadville, Pennsylvania. She grew up in Benton Harbor, Mich., where she graduated from Benton Harbor High School in 1944. She immediately was hired as a bookkeeper by the Truscott Boat & Dock Company in St. Joseph, Mich., which was making boats for the war effort. It was there, after the war, that she met her future husband. She and Calvin D. Reber married on March 12, 1948, in South Bend, Ind. They resided in the St. Joseph/Benton Harbor area until 1981, when they moved to Montgomery, Ala.

Ruby worked in the offices at Memorial Hospital in St. Joseph from 1969 to 1981. She had worked earlier at Theisen Tire & Truck Supply and G.C. Murphy, both in St. Joseph. In Montgomery, Ruby worked at Kinpak, Inc., until her retirement in 1988. She was active in several organizations in Montgomery and volunteered at Baptist Medical Center East there until she moved to Kansas City in 2015. Ruby always was busy with a needlework project -- crocheting, knitting, embroidery and tatting – and was universally described as a sweet person.

Ruby was preceded in death by her husband in 1997. She is survived by their daughters, Janet (Lawrence) Marsh of Kansas City and Linda (Brenton) Roberts of Saranac, Mich.; grandsons
Clint (Kristine) Clemens of Ionia, Mich., and Chad (Nickole) Clemens of Fenwick, Mich., and several great grandchildren.

Arrangements have been entrusted to Starks & Menchinger Chapel. A private Celebration of Life Graveside service will be held at a later date at Spring Run Cemetery, St. Joseph, MI. Those wishing to leave an online condolence may do so at www.starks-menchinger.com.
Read Less

Receive notifications about information and event scheduling for Ruby

Print
A private Celebration of Life Service will take place at a later date at Spring Run Cemetery.

We encourage you to share your most beloved memories of Ruby here, so that the family and other loved ones can always see it. You can upload cherished photographs, or share your favorite stories, and can even comment on those shared by others.

Posted May 14, 2020 at 09:52am
So sorry for your loss, Linda and Janet. I knew your Mom and Dad through working at Saluto Foods in Benton Harbor. I still have a recipe Ruby gave me for her water chestnut meatballs. I have so many good times working with your Dad and remember his wonderful laugh. God's Blessings to you both and your families.
Comment Share
Share via:
RB

Posted May 13, 2020 at 11:40pm
Ruby and Cal were wonderful neighbors to a young couple trying to make their way in the world.
Their storage shed doubled as Santa's workshop where tricycles and bicycles were assembled and stored until Christmas Eve.
After Cal's passing, we grew ever closer to Ruby over the years. I learned much from Ruby: ranging from how to tell if an egg is fresh, to the nature of rhubarb (which isn't much of a southern thing). Her jelly-filled cookies remain a near-mythical treat in our culinary memories. We still have the items she crocheted for us, including the towel presently hanging from the door knob to our pantry.
It feels like the right time to make jelly-filled cookies - and someday, maybe even rhubarb pie.
May God bless Linda, Janet, and the whole Reber clan. Thank you for sharing sweet Ruby with our family.
- Rusty (Barton)

Posted May 13, 2020 at 09:22pm
There are so many special memories of Ruby there is no way to choose just one. Ruby and I bought many flowers together over the years to plant every spring, we always took the kids Easter picture in front of her beautiful azaleas, we went over every Christmas for Ruby’s special homemade cookies and milk, Ruby kept the older three children when we went to the hospital to have our fourth baby, Ruby shared a piece of wisdom that I think of often, she said “Tracy, don’t worry about the toys and your house not being perfectly clean because there will come a day when you wish there were toys to step over and kids to clean up after” and she was so right. Ruby was a part of our family and we loved her dearly. ~ Rusty and Tracy Barton
Comment Share
Share via: 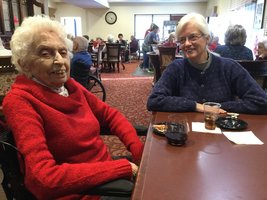 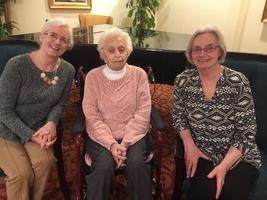