To share your memory on the wall of Ronald Szoke, sign in using one of the following options:

Ron was born on September 5, 1947 in South Bend, IN, to Gabriel Jr., & Julia (Molnar) Szoke. He graduated from Riley High School in 1965. Immediately following graduation, when only 17 years old, Ron got permission from his dad to allow him to enlist in the United States Navy. He was stationed in Japan as a Radio Jockey. Upon returning home, Ron married the love of his life, Thelma Kellner, on October 6, 1973 at Our Lady of Hungary Church in South Bend. Ron held the title of Shift Supervisor at various foundries such as Alreco, Bosch and Warsaw Foundry. He commonly would have multiple jobs at a time to make sure that his family was always well taken care of. His wife and two sons meant everything to him so he worked hard his whole life to make sure they had everything they needed. While the boys where in school, Ron and Thelma took great pride in being a part of the Lakeshore High School Band parents’ group, where they got to work in the concessions stand, chaperone band competitions and field trips, but most importantly, it allowed them to never miss an event their children were in.

Coming from a strong Hungarian family, Ron was known for cooking delicious and authentic meals. A staple dish that was always at family events was his famous potato salad, and also Hungarian cucumber salad. One of his favorite dishes to make for his family was tongue & rice, a recipe that was given to him from his mother-in-law. Another hobby of his was collecting sports memorabilia. Ron was a former owner of a sports memorabilia company where he would collect and sell sports cards. During the winter seasons, one of his favorite things to do was to ice fish with his brother, Albert. Ron was an avid fan of the Chicago Bears, Notre Dame and the White Sox. He was also a proud member and Elder of Christ Lutheran Church.

We encourage you to share your most beloved memories of Ronald here, so that the family and other loved ones can always see it. You can upload cherished photographs, or share your favorite stories, and can even comment on those shared by others.

Posted Dec 09, 2020 at 10:13am
May God give you peace and comfort in your loss, Thelma and Family! Dave and Alyson Olmstead
Comment Share
Share via:
CB

Posted Dec 05, 2020 at 10:19am
To Thelma and Szoke Family...
I send my CONDOLENCES, BLESSINGS and PRAYERS🙏🙏🙏 during this CELEBRATION and HOMEGOING of their LOVE ONE, "RON SZOKE."
Comment Share
Share via:

I will always remember your wild hair. 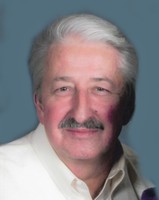