To share your memory on the wall of Ronald Sonneman, sign in using one of the following options:

Print
Ronald Sonneman 83, of St. Joseph passed away on Thursday April 29, 2021 at Hanson’s Hospice in Stevensville.

Ron as he was known by most was born August 15, 1937 in Sterling, Illinois. The son of Robert and Mary Ruth (Frye) Sonneman b... Read More
Ronald Sonneman 83, of St. Joseph passed away on Thursday April 29, 2021 at Hanson’s Hospice in Stevensville.

Ron as he was known by most was born August 15, 1937 in Sterling, Illinois. The son of Robert and Mary Ruth (Frye) Sonneman both of whom precede him in death. Also preceding him is his sister Jean Galloway.

Married Janice Ohnen his high school sweet heart February 1,1958. Graduated from University of Illinois in 1959 with a bachelor’s degree in business. While in college trained in the Reserved Officer’s Training Corps. Served in the Army at Fort Lee Virginia for 2 1/2 years.
Returned to Illinois and took a job at Harris Bank in Chicago for 15 years. Moved to Stevensville in 1978 to head the Trust Dept. For Intercity Bank now TCF. In St Joseph. He retired 2001 Vice President of Trust Dept. Ron has spent 38 years in the banking business.

Ron enjoyed lots of activities. His first love was fishing. He fished on many Lakes and rivers in Wisconsin also trips to Canada with his Brother Warren.

When moving to Michigan he began to play tennis and golf. Ron and Jan enjoyed cruises and trips to the Caribbean and Europe with friends.

Donations can be made to the Salvation Army or Stevensville United Methodist church. A Graveside service will be held at 10:00 A.M., Saturday, May 15, 2021 at Spring Run cemetery, Royalton Twp., with pastor Dave Hills officiating. Those wishing to share a memory of Ronald online may do so at www.starks-menchinger.com
Read Less

Receive notifications about information and event scheduling for Ronald

We encourage you to share your most beloved memories of Ronald here, so that the family and other loved ones can always see it. You can upload cherished photographs, or share your favorite stories, and can even comment on those shared by others. 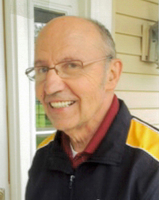