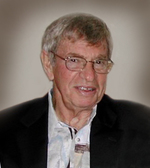 Ron Sisson, 84, ended his battle with Parkinson’s disease on Wednesday, April 22nd, 2020. He was born on December 11, 1935 to Darford and Mabel Van Lente Sisson. He grew up in St. Joseph, MI where he was very active in all sports and the National Honor Society. After SJHS graduation, he attended Hope College where he played basketball. He then transferred to University of Michigan and received an Engineering Degree in 1959. He also received an MBA from Michigan State University. His death was preceded by his sister Joyce Wilson. He is survived by his wife Karlyn Zick Sisson, with whom he recently celebrated his 59th wedding anniversary. He is also survived by his children Scott (Amy) Sisson, Ronalyn Sisson, Karin Noel Sisson, Steve (Lauri) Sisson; brother Dr. Gary (May) Sisson; grandchildren Lindsey (Rob) Hicks, Hayley (Yamil) Pietri, Wyatt Sisson, Alex (Erin) Cochrane, Michael Calistri, Hannah Calistri, Will and Ben Sisson, Caroline Sisson, John MacDonald and Shari (Michael) Marchbanks; great-grandchildren Emery Hicks, James and Ellia Cochrane and Blair Marchbanks.

Ron was a true visionary and entrepreneur. He designed and built several sailboats during his lifetime. Ron was an example of the “Great American Dream”. He was successful through his hard work, intelligence, dedication and blessed in whatever he pursued. He used his engineering knowledge for 20 years at Clark Equipment in Benton Harbor, Buchanan and Jackson, MI where he designed many patents. He then went to work at Haworth as a VP of Mfg. From Haworth he became the President of Arrow Door Company. His dream was to own his own company and he then found a millwork company with 10 employees for sale in Grand Rapids. He purchased the assets and formed KARONA INC, which he named after his two daughters Rona and Karin. Ron his wife and three of their children worked at the company. They traveled to Austria, Germany, England, Italy, France, Monte Carlo, Belgium, Netherlands, and throughout the USA. In 2000, Ron incorporated a kitchen cabinet door Company HANLIN named after Hannah, Lindsey and Hayley, three of his grandchildren. KARONA Door was sold to JELD WEN in 2015 due to Ron’s failing health. Ron also started the MBJA sailing program at MBYC. He and his wife lived Summers on Lake Macatawa and winters in Bonita Bay, Bonita Springs, FL. Ron’s main hobby was racing his sailboat, “ZOO,” and eventually relaxing on his tiara 52 power boat “ZOOKEEPER”. He participated in multiple Chicago Mac and Port Huron Mac races and also enjoyed playing tennis. He and his children were avid sailors, traveling to many regattas and winning many trophies, including the MORC International Championships twice.

A private family service with burial to follow will be held at Riverview Cemetery in St. Joseph, MI, on Saturday, April 25th, 2020. Due to Covid-19, a Celebration of Life Service will be held at a later date. Memorial contributions may be made to Michael J. Fox Parkinson’s Foundation, U of M Cardiology c/o Dr Kim Eagle, MBJA sailing or St. Joseph Junior Foundation Sailing School. Arrangements have been entrusted to Starks and Menchinger Chapel and Cremation Services. Those wishing to leave an online condolence may do so at www.starks-menchinger.com.


Memorial Donations may be sent to: