To share your memory on the wall of Robert Hatch, sign in using one of the following options:

In 1952 he originated the harbor patrol, writing the “Rules of the Road” for safe travel in the St. Joseph Harbor.

He worked with his family at Saint Joe Iron Works, later renamed Saint Joe Machines. He was Vice President and Director of Engineering. In 1965 Urban Renewal purchased the building he purchased a small plant in Bridgman, named Stephens MFG. He later sold the business and began a career in real estate. Bob earned all real estate designations and was always in the top five of sales.

Robert became a genealogist prior to ancestry.com and the internet. His research took him to many east coast locations where he spent hours tracing his lineage to the 1200’s in England.

Bob was active in the community as a board member, volunteer or aid, including the St Joseph Library, Krasl Art enter and Lakeland Hospital. He was the longest living member of the local Elks Club.

Bob had a youthfulness of spirit. his interests and activities were many and varied, from being a ham radio operator, to taking art classes at the senior center. His love of learning continued his entire life. After college, he took one class a year for 50 years.

Bob received his private pilots and sail plane license in the 60s. He took up tapdancing at age 80, and parachuted at age 85. He loved music and was teaching himself the saxophone and trombone at age 87. For his 95th birthday, he celebrated by once again flying a glider.

Bob has written several books, How to Embalm Your Mother-in-Law and The Zorkoff Experiment. He complied and published Memories of Yesteryear for the Heritage Society, and book III of Lest We Forget Series. He completed his last book, unpublished as this point, at age 96.

A private graveside service was held at Riverview Cemetery on April 13, 2020. The family wishes to extend their gratitude and love for the support received from Caring Circle (Hospice at Home) and Hanson Hospice. Prior to his move to Hanson, he was cared for by Donna Davis, who became like one of the family. Their nurturing assistance has been invaluable during these very trying times. In lieu of flowers, donations may be made to Caring Circle (Hospice at Home) Those wishing to sign Bob’s Memory Book online may do so at www.starks-menchinger.com.
Read Less

Print
No Services are planned at this time.

Posted Apr 28, 2020 at 12:54pm
Oh Mr. Hatch. You were the best ever. The entire Miller family adored your family. Your brother was my father's (Joseph Marne Miller) Best Man and I think visa versa. Since Dad passed away at 45 , we never really had a chance to just talk and know all the memories your family shared with ours. You were a wonderful, kind, intelligent and funny man. And that's not from what Dad told me but Mom shared some memories but she passed away in 2009 and not really well enough to talk about a lot of things. We all miss them so much ……… so PLEASE give them a hug and let them know, you all are in a much better place, especially now. My condolences to you entire family including the wonderful man Mom married a few years after losing Dad (Merlyn VanBrocklin) 1919-2000. He was such a wonderful and kind man and the only Grandpa (Papa) all our kids ever know. Please give him a big hug too. So glad hugging is allowed in Heaven. May your enjoy Paradise and Rest in Peace with all your family, our family and ALL the many friends who adored you. Jack, Judi, Debbie, Douglas and Rick Miller.
Comment Share
Share via:
DG

Posted Apr 21, 2020 at 10:26pm
Uncle Bob lived a long and eventful life filled with not only adventure but also the serious side. He loved the heritage and history of where he came from and the town and people in it that effected him. We are all so happy that he wrote so much down for us to pass to our children and grandchildren. God Bless my cousins that will miss him so terribly.
Comment Share
Share via:
AS

Posted Apr 20, 2020 at 11:18pm
It was a pleasure to serve on the Board of Trustees of the St. Joseph Public Library with Bob.
Comment Share
Share via:
CG

Posted Apr 16, 2020 at 06:21pm
Mr. Hatch was always a joy to be around, always had a smile on his face. He brought so much happiness to people. A very kind man. Another angel he’s in heaven now. My thoughts and prayers are with the family. He will live on forever in your hearts.
Comment Share
Share via: 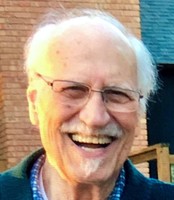