To share your memory on the wall of Robert Diehl, sign in using one of the following options:

Private burial will take place at New Troy Cemetery in New Troy. A Celebration of Life Service will be announced at a later date. Memorial donations in Bob’s name may be made to St. Joseph-Lincoln Senior Center or the Baroda American Legion. Those wishing to sign Bob’s Memory Book online may do so at www.starks-menchinger.com.

Bob was born January 17, 1927 in Emmettsburg, Iowa to Daniel & Mary (Beck) Diehl, Sr. He graduated from Cassopolis High School after serving his country in the United States Navy during WWII. On December 6, 1947, he married the former Norma Payne. Bob owned & operated Bob’s Barber Shop in New Troy for 30 years before starting his second career as a machinist at F.P Rosback Co. in St. Joseph where he worked for several years.
As a younger man, Bob was active in competitive skeet shooting. He enjoyed traveling with his wife to Alaska, boating, fishing, camping, and playing Euchre at the St. Joseph-Lincoln Senior Center. Bob was a member of the Baroda American Legion and formerly of New Troy American Legion.

Posted Nov 29, 2020 at 11:03am
Vicki, I am so sorry to hear about your dad. He was such a great guy I remember going with my dad and brother when they got hair cuts and your dad always had a sucker for me, great memories of Bob's Barber Shop. I miss seeing you hopefully will see you soon.
Marcia Dinges
Comment Share
Share via:
JL

Posted Nov 19, 2020 at 08:25am
Roberta, I am so sorry to hear about your loss. My love and deepest sympathy to you and your family.
Janet Moore Keefer Lagness
Bridgman
Comment Share
Share via:
DD

So sorry for your loss. We are thinking of you during these sad times. Our condolences.

Posted Nov 18, 2020 at 07:15pm
Bob was a friend to many and will be greatly missed by all of us at Crown Pointe.
Comment Share
Share via: 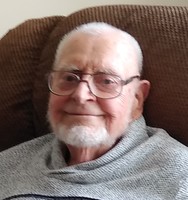