To share your memory on the wall of Robert Bowman, sign in using one of the following options:

Bob was born on August 2, 1941 in Dell, AR to the late Robert and Elnora (Tharps) Bowman. He was baptized, confessing his faith in Christ at an early age under the late Rev. Raspberry at New Bethel Baptist Church. Robert was a proud 1961 graduate of Benton Harbor HS and a member of the basketball team, earning the nickname “BoHawk”. He was honorably discharged from the United States Air Force in 1965. On March 19, 1966, he married Betty Robinson, the love of his life. Robert had a 30-year career at IBM, and after retiring he returned with his family to serve his hometown community.

Bob lived a purpose driven life and at the center was his family, home, church, and community. He worked hard providing for his family and was a dedicated husband and father, setting examples of leadership and love.

Bob served as a community member in many ways in the Benton Harbor and St. Joe area. He worked tirelessly for the youth in “Dads for Education” and “Parents as Partners” in the schools. He also worked in planning the B.H./S.J. Rotary Track Meet.

Robert was a member of Union Memorial AME Church. He served as a Trustee, a former President of the church Senior Club, and a committed fundraiser in the Men’s Ministry. He was also as a founding member of “The Band of Brothers in Christ”.

Bob had a passion for cooking and sharing this love of food with family and friends. Becoming a member of “The 18 Club” gave him many opportunities to engage in social activities and host community gatherings.

Being a veteran of the U.S. Air Force and Reserves inspired Bob to become involved in local politics; serving as a campaign manager, a member of the Benton Harbor School Board and the Benton Harbor Charter Township Civil Service Board.

On Dec. 1st, 2012, Alpha Kappa Alpha Sorority, Iota Iota Omega Chapter selected Bob as “A Man of Excellence” for his dedicated service for providing opportunities for growth and development to the people of the community.

A Celebration of Life Service will take place on Tuesday, March 9 at 11am, with Rev. Minnie Autry officiating, at Starks & Menchinger Funeral Home. Burial will follow at Crystal Springs Cemetery in Benton Harbor. Visitation with the family is on Monday from 5:00-7:00pm at the funeral home. Memorial contributions may be made to the Boys and Girls Club of Benton Harbor, www.bgcbh.org. Friends wishing to leave the family a message of condolence may do so at www.starks-menchinger.com. You may also view the recorded service at a later time on the funeral home website. In respect of the families wishes, please practice social distancing.

Posted Mar 06, 2021 at 11:52am
We pray the love of God comforts and guides you during your journey through grief towards peace. With love and remembrance,

3 trees were planted in the memory of Robert Bowman

Posted Mar 14, 2021 at 09:08pm
I am honored and grateful to have worked with Bob at the Boys and Girls Club (2001-2005) His commitment to the organization and young people, through leadership, guidance and time and resources was a highlight of my career. In all his visits to the Club and any time I saw him, he always had a hearty laugh and beautiful smile that left you feeling better, no matter the circumstances. THANK YOU for all you brought to this old world. Our sincere and heartfelt condolences are extended to Betty, the children and all those who will treasure his memory.

Posted Mar 09, 2021 at 10:02am
My most memory is growing up with him and his sibilings on Townline Road.
And working with him on the Townline Community Reunion. Very proud of Robert of all his
accomplishments. You are going to MISSED.
R.I.P

Posted Mar 08, 2021 at 06:06pm
Betty sending a BIG HUG and prayers for your comfort. I'll remember Robert as a kind respectful gracious pleasant young man with a great smile. My condolences to your families. Bae Mae
Comment Share
Share via:
SK

Posted Mar 08, 2021 at 05:17pm
Sending my most heartfelt condolences to Monica, Jon, your mother and the entire family. Often times we are judged by the legacy that we leave behind and Mr. Bowman should be very proud on a job well done. I will continue to keep the family in my prayers.
-Scott King
Comment Share
Share via: 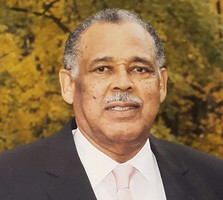