To share your memory on the wall of Robert \"Bob\" Dolsen , sign in using one of the following options:

Bob was born on October 27, 1934 in Detroit, but spent most of his childhood growing up in Muskegon with his parents, Robert Sr. and Elizabeth, and his younger sister Betty. After high school, Bob joined the army for a 2-year non-combat stint. This enabled him to take advantage of the G.I. Bill and attend college, receiving his B.A. at Central Michigan University. It was at CMU that Bob met Ruth Pattullo, who on August 30, 1958 would become his wife for the next 62 years. After that, he got his M.A. from Michigan State University. Bob was an avid Spartan fan and football season ticket holder, and in his retirement years he attended nearly every home game to cheer them on with his nephew Steve Payne.

After college, Bob and Ruth became teachers, moving to Three Oaks and starting their teaching careers at New Troy High School. Shortly after, the two moved to St. Joseph and Bob went on to teach classes at St. Joseph High School and later at Lake Michigan College. There he taught English, Humanities and Philosophy for more than 10 years, and also served as Chair of Communications and Fine Arts Division at LMC.
In 1963 Ruth gave birth to their eldest son, Gary, who now lives in Boulder, CO with his wife Tracey and their son Wesley Dolsen. In 1967 they had a second son, Jeffrey, who currently resides in Madison, WI. Both grew up happily in St. Joe and both graduated from MSU to become Spartans like their dad.

After years of teaching at LMC, Bob’s life took a new turn and he was given the opportunity to become the Executive Director for the Region IV Area Agency on Aging. In this leadership role, he assembled a team of talented people and developed the fledgling agency into the well-respected organization it is today, providing assistance for countless seniors not only in the Southwestern Michigan area, but across the state and even the country. Bob spent 27 years in his role advocating for improving health and assistance programs for older Americans, for which he received several state and national awards. He was Legislative Chair for the National Association of Area Agencies on Aging and wrote testimony and presented before congressional committees on eight occasions. He served as a member and Chair of the Regional Health System Agency Board, and appointed the Michigan Statewide Health Coordinating Council, which he also chaired for two years. He also served as Chair of the Healthy Berrien Consortium for over two decades.

In his retirement years Bob continued to be involved in the advocacy of programs to assist seniors, and for over twenty years wrote a regular column for the Herald-Palladium called Generations, addressing issues and telling stories relating to senior life. He remained an active member of the community, often freely volunteering his time and experience to assist those he worked with for so long. He was also a longtime active member of the St. Joseph Benton Harbor Rotary Club.

He enjoyed being retired and the many simple pleasures in his later years: sharing his weekly Thursday breakfasts and discussing world events with his good friend John Calsbeek, playing golf with his young grandson Wes and with his friends near their winter home in Arizona, and reading a good book on his Kindle. He followed current events closely and loved to read and watch the news, especially the PBS Newshour.
Bob is survived by his wife Ruth, who, as well as being a loving wife and mother, also acted as caretaker and strongest support system for Bob during his last years of failing health. His remaining family also includes his two sons and grandson, his sister Betty, and his nieces and nephews: Steve, Sandy, Carin, Stacey, Lisa and Scott.

Bob will be cremated and his ashes interred in the columbarium at Riverview Cemetery, Section 9, Niche 6, number 5. Arrangements are being made by Starks & Menchinger Chapel. Funeral or memorial services will not be held at this time, but donations may be made in his name to the Region IV Area Agency on Aging, or the Michael J. Fox Foundation for Parkinson’s Research. Those wishing to share a memory of Bob online may do so at www.starks-menchinger.com
Read Less

Receive notifications about information and event scheduling for Robert "Bob"

We encourage you to share your most beloved memories of Robert "Bob" here, so that the family and other loved ones can always see it. You can upload cherished photographs, or share your favorite stories, and can even comment on those shared by others.

Posted Sep 13, 2020 at 03:54pm
I am sorry to hear about the passing of Mr. Dolsen. Your family was always very kind to the kids in the old neighborhood and this "old kid" still remembers after almost 50 years. Sincere condolences from a former resident of Willa Drive.
Comment Share
Share via:
LK

Posted Sep 01, 2020 at 12:05pm
I had the privilege of working directly with Bob for 24 of the 26 years he led the AAA, and again through multiple affiliations following his retirement. He's the founder of AAA, was my mentor, and like many drawn to his wit, kindness and humor, he became a dear friend. My husband and I enjoyed visiting and picnicking with Bob & Ruth in the beautiful landscapes around their lovely home in Arizona. Bob was a voracious reader; naturally a broad thinker with vision. He advised me to cast a vision, hire smart people, and let them go - a great recipe for innovation and fulfillment. I, and so many of his colleagues and friends, will miss him dearly. My deepest sympathy to Ruth and the family.
Comment Share
Share via:
F


I was a humanities student of Bobs at LMC in the late 60s. He set the groundwork for the type of human being l wanted to be for the rest of my life. What I had learned from him was a life changing experience, and likewise for all the students he inspired.
Comment Share
Share via:
DD

So sorry to learn of Bob’s passing. Bob was not only a staunch advocate for many good things most especially a better life for seniors, but he was also a true gentleman. I love the choice of the picture of Bob with a smile. That says everything we need to know and remember about Bob. Always positive. Always optimistic. Always on the right side of issues. A good man by all measures. Our sincere condolences.

Posted Aug 27, 2020 at 07:59pm
I had the magnificent privilege of working with Bob at St. Joseph High School and then again with the Area Agency on Aging and wonderful exchanges at the notorious "Table 2" at the St. Joseph/Benton Harbor Rotary Club. He was erudite, funny, committed and truly sincere. He will be missed by so many people. I'm so glad he was my friend.
Dennis L Bowen
Comment Share
Share via: 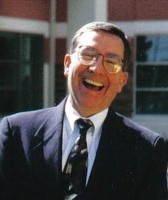