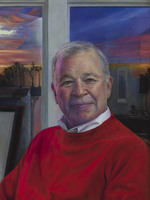 R. Scott Trumbull died peacefully surrounded by his family following his five-year battle with Mesothelioma on August 29, 2020, in his St. Joseph, MI home, looking out on a beautiful Lake Michigan sunset. He was 71 years old. He was grateful for the support of his family and friends and thankful for the treatment he received from Memorial Sloan Kettering, the University of Michigan, the University of Chicago, ProMedica, and Start Midwest, which helped to prolong his life. Arrangements have been entrusted to Starks & Menchinger Chapel. Those wishing to leave an online condolence may do so at www.starks-menchinger.com.

Scott was born in Toledo on September 24, 1948, to Richard Eugene Trumbull and Marian Davis Trumbull. He grew up in Omaha, Nebraska and Kansas City, Missouri. He attended Center High School in Kansas City and Denison University in Granville, Ohio where he was a standout student and athlete. He earned an NCAA Postgraduate scholarship which he used to get an MBA from Harvard Business School. He started his career at Owens-Illinois, Inc., Toledo, Ohio, in 1972, rising through the ranks to become Chief Financial Officer. In 2002 he became Chairman and Chief Executive Officer of Franklin Electric in Bluffton, Indiana. He led Franklin Electric for 12 years, greatly expanding the company and moving its headquarters to Fort Wayne, Indiana. He served on many corporate boards, including Schneider National, Welltower, Artisan Partners, and Columbus McKinnon, as well as the Toledo Museum of Art, ProMedica, and Denison University, where he was named a Life Trustee.

In his career, he always acted with integrity and intelligence. In his family life, he was loving and patient. In all things, he was kind, respectful, and fiercely competitive. He was a lifelong runner and avid golfer. For 47 years, he was an amazing husband to Margaret Upton Trumbull, raising three children, and joining in her passion for glass art and birding.

He was preceded in death by his mother, Marian, and father, Richard. He is survived by his wife, Margy, his sons Matthew Upton Trumbull, Benjamin Davis Trumbull, and William Fredrick Trumbull, daughters-in-law Heather, Katherine, and Dana, grandchildren Andrea Beryl, Jaye Marian, Brynnan Brand, Katherine Scott, Upton Davis, Taggart Eberle, Bubba Eugene, and Beau William, as well as his brother Mark Davis Trumbull and sister Susan Trumbull Magnuson, and numerous nieces and nephews. Memorial service plans to be shared at a later date. In place of flowers, please make a donation to the Toledo Museum of Art, Denison University, the Black Swamp Bird Observatory, or Good Grief of Northwest Ohio.

To Whom it May Concern,
I grant permission to use the provided digital image (Portrait of R. Scott Trumbull by Leslie Adams) for publication in newspaper, magazine, or any related press.

Please contact me directly at 419.255.4321 if you have any questions or need additional information or files. Thank you. Leslie Adams