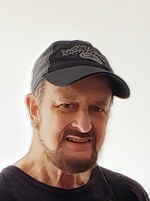 Rick was born on August 23, 1955, to John & Betty (Boyd) Rimpel, in St. Joseph. He graduated with the class of 1973, from Lakeshore High School, he then continued his education at Lake Michigan College and Andrews University. On June 2, 1979, Rick married the love of his life Bonnie Charleston at St. Paul’s Lutheran Church in Stevensville. Rick worked as an Engineer, most recently for State Tool & Manufacturing, before his retirement at the age of 60. Rick enjoyed collecting tools and tinkering around in his workshop. Most of all he loved to spend his time with his family.

Rick is survived by his wife of 41 years, Bonnie Rimpel of Stevensville; daughter Sarah Rimpel of Bridgman; siblings Susan Rimpel Birnie of Pennsylvania and Ron Rimpel of St. Joseph; and beloved dog snickerdoodle.

Rick was preceded in death by his parents, John & Betty Rimpel and brothers, John & Mark Rimpel.