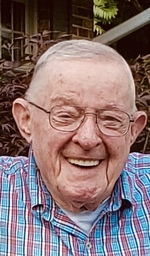 Richard Thomas Beaudette, 92, of St. Joseph, passed away peacefully on Friday, June 19, 2020 at the Westwoods of Bridgman.

A private committal service has taken place at Riverview Cemetery in St. Joseph. In lieu of flowers, memorial contributions may be given to Caring Circle Hospice, www.spectrumhealthlakeland.org/caring-circle/give-now/donate.

Richard “Dick” was born September 29, 1927 in Chicago, IL to Ellsworth J. and Geraldine (Fidlerova) Beaudette. He was a veteran of the U.S. Navy. Dick worked for many years at City Plumbing as a heating and air conditioning technician and was a proud member of the Union – Local 357. Even after retirement, he still continued to work with his City Plumbing family. On April 18, 1964 he was joined in marriage to Fern (Ray) Kirschenbaum in St. Joseph. For the past 32 years, you could find Dick most mornings at Thornton’s Downtown Café in St. Joseph where he enjoyed his social time with friends. He will be missed by many.

He is preceded in death by his son, Michael Beaudette; his grandson, Jon Kim; his sister, Geraldine Beaudette Smith; and his parents.