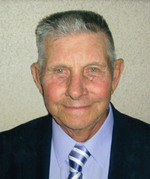 Quentin Ellingson, 89, of St. Joseph, died August 26, 2020 with his family by his side after a yearlong battle with cancer.

Quentin was born on March 4, 1931 in Rugby, North Dakota to Albert and Dorothy Ellingson. In 1952, after serving in the Army, he moved to Berrien County Michigan.

On December 27, 1958 he married Barbara Hudson and together they raised 3 beautiful daughters.

He was a veteran of the United States Army and retired from the City of St. Joseph Public Works in 1993.

Quentin enjoyed spending time with his family and friends. He was best known for the many things he collected over the years, which included antiques, badges, licenses plates, street signs, coins, Disney memorabilia and many other things. After retirement, Quentin and Barbara enjoyed going on many vacations across the United States, his favorite place being Disney World.

Quentin is survived by his wife of 60 years, Barbara Ellingson; daughters, Lynn Ellingson, Sharon Adkins and Amy (James) Jonatzke. He was a proud grandfather of 8 amazing grandchildren and 6 great-grandchildren.

A Celebration of Life Graveside Service will take place on Thursday, September 3, 2020 at 11:00 AM at Spring Run Cemetery on M-139 in Royalton Township, St. Joseph. Those wishing to leave an online condolence may do so at www.starks-menchinger.com. Memorials can be made to Caring Circle Hospice, Lakeland Health Fndn, Attn: Jennifer Scaccia, 1234 Napier Ave., St Joseph, MI 49085.