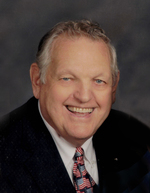 With heavy hearts, we announce that Peter Alex Ruppel, age 86, of St. Joseph, Michigan, passed away peacefully in his home on Saturday, June 27, 2020.

He was born on June 18, 1934 in St. Joseph, Michigan, to the late Henry and Mary Ruppel. He graduated from St. Joseph High School in 1954 and was on the 1953 High School State Basketball championship team. He served in the Air Force as a radio operator/repair technician, worked for the Voice of Music and retired from the Benton Harbor Public Schools as an Audio-Visual Technician. He married Beverly Jean Henke, his church sweetheart, on April 21, 1955. They raised 2 sons and a daughter, Steven, Deborah, and David. He was active in the Calvary Bible and Napier Parkview Baptist Churches. He was involved in Bible-based evangelism serving in the Boys Brigade and Awana Clubs, bus ministries for youth outreach, the Gideon Bible ministry and nursing home visitation. He was on the Mission board and went on mission trips to Belize and Peru. A huge sports observer and diehard Chicago Cubs fan, he was thrilled when they finally won the World Series in 2016.

Along with his wife of 65 years, he is survived by his sons, Steven and David and daughter, Deborah; his sisters, Mary Niezgodski, Esther Abbott and sister-in-law, Ellen Ruppel. He is preceded in death by his parents; sister, Anne; brothers, Walter, Chris, and Henry; brother-in-law, Walt Abbott and step-brothers, David and Godfrey Schimpf.

A future memorial service will be announced. Arrangements have been entrusted to Starks & Menchinger Chapel & Cremation Services, 269-556-9450. Those wishing to leave an online condolence may do so at www.starks-menchinger.com.