To share your memory on the wall of Patricia Faraone, sign in using one of the following options:

Print
Patricia ‘Patti’ Faraone of Evanston, IL, passed away of natural causes on Monday February 10, 2020 while on vacation in Argentina.

Born in Coloma Michigan on October 29, 1958, Patti attended Coloma High School and matriculated to We... Read More
Patricia ‘Patti’ Faraone of Evanston, IL, passed away of natural causes on Monday February 10, 2020 while on vacation in Argentina.

Following university, she moved to Chicago where she enjoyed a number of exciting hotel and hospitality related jobs that took her to Switzerland, England and Hawaii. Patti was known for her infectious and exuberate personality, her legendary 3 county laugh and being the life of the party. Her greatest joy was to be surrounded by family, friends and dog Zoe. An avid reader and lover of crossword puzzles, her most favorite pastime was being on the beach in Michigan enjoying conversations with anyone who crossed her path – Patti never met a stranger. Her love for her late husband William ‘Bill’ Thompson Pike led to the story book ending to her life. The night before she passed, she dreamt that she was walking on the beach when she felt someone touch her hand. She turned around and it was Bill who said ‘Come on Patti, let’s go.’ Patti died on the 3rd anniversary of Bill’s death. Her last trip abroad was the beginning of a new and everlasting one.

A memorial service for this summer is being planned and will be announced to friends and family.
In lieu of flowers, your contribution to the Alliance for the Great Lakes at greatlakes.org, would be greatly appreciated.
Read Less

We encourage you to share your most beloved memories of Patricia here, so that the family and other loved ones can always see it. You can upload cherished photographs, or share your favorite stories, and can even comment on those shared by others.

Posted Feb 19, 2020 at 02:54pm
I have great memories when we were little girls, our fathers were such great friends Bud,Vito and Vince. Patti’s smile was infectious. May your wonderful memories of her help you feel at peace
Love Robyn Dudas 💜
Comment Share
Share via:
VM

Posted Feb 19, 2020 at 11:55am
A book would need to be written to share a lifetime of memories. The Capizzo/Farone history is a special one starting with our grandparents. Patti always knew what got under my skin growing up, walking into my room and rearranging my organized collections. We grew up next door to each other, carpooled to school from St John's to Coloma. Most milestones in our lives have been spent together. She is "Aunt Patti" to my sons, nieces and nephew. Summer gatherings will never be the same. Her void is felt as I am no longer receiving my daily calls from her. My heart breaks, and will miss her. 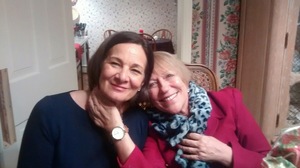