To share your memory on the wall of Ocie Young, sign in using one of the following options:

A celebration of life service will be held privately on Friday, May 22, 2020, due to current events. Private b... Read More
Ocie Young, Jr., 81, of Benton Harbor, passed away on Sunday, May 3, 2020, at Spectrum Health – Buttersworth, Grand Rapids.

A celebration of life service will be held privately on Friday, May 22, 2020, due to current events. Private burial will take place at North Shore Memory Gardens. The family encourages everyone to go online at www.stark-menchinger.com or call in to leave your messages and memories for them to reflect on.

Ocie was born on May 22, 1938, to Ocie, Sr., and Deola (Linsey) Young in Gilmore, AR. On June 29, 1992, he married Margaret L. Kohn. Professionally, Ocie worked for Allied Signal, now Bosch, for many years before retiring. He had a great work ethic and was an excellent business man, owning several properties over the years and was part owner in Rover Security which was started in 2012. Ocie loved the Lord and was an active member at New Bethel Baptist Church, Benton Harbor. He enjoyed playing dominoes and most of all cherished his family and was a wonderful husband and father.

Receive notifications about information and event scheduling for Ocie

We encourage you to share your most beloved memories of Ocie here, so that the family and other loved ones can always see it. You can upload cherished photographs, or share your favorite stories, and can even comment on those shared by others.

Plant a Tree in Memory of Ocie
Plant a tree
0 trees have been planted in memory of Ocie Young Jr.
JS 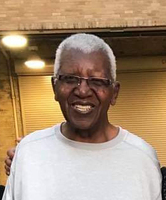