To share your memory on the wall of Michael Johnson, sign in using one of the following options:

A Celebration of Home Going Service will be held 2:00 P.M. Friday, December 11, 2020, at The Ark of the Covenant Church, 848 Buss Ave., Benton Harbor, with Pastor Roy Askew, Sr. officiating. Arrangements are entrusted to Starks & Menchinger Chapel, St. Joseph. Memorial donations in Michael’s name may be made to the Family, c/o Regina Johnson. Those wishing to sign Michael’s Memory Book online may do so at www.starks-menchinger.com.

Michael was born September 17, 1961 in Berrien Springs to James “Bo” & Irma Lee (Martin) Johnson. He graduated from Benton Harbor High School, Class of 1979. After high school, Michael served his country in the US Army. Michael was previously employed at Coloma Frozen Foods as a Fork Lift Operator, and attended Blue Roof Church in St. Joseph.

Receive notifications about information and event scheduling for Michael

Plant a Tree in Memory of Michael
Plant a tree 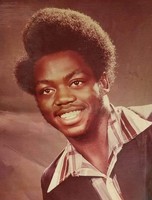