To share your memory on the wall of Michael Hallman, sign in using one of the following options:

A Celebration of Life service will be held on Wednesday, March 18, 2020, at 6PM, at Starks & Menchinger Chapel, 2650 Niles Rd., St. Joseph, with Pastor J.T. Wilkins Jr. officiating. Friends may visit with the family on Wednesday, from 5PM until time of service at the funeral home. Memorial contributions may be made to Southwest Michigan USBC Bowling Association. Those wishing to leave an online condolence may do so at www.starks-menchinger.com.

Michael was born on December 5, 1948, in Grand Rapids. He graduated from St. Joseph High School. Michael proudly served his country during the Vietnam War before he was honorably discharged from the Army. On August 15, 1970, Michael married the love of his life Cynthia Rousselle in St. Joseph at the United Methodist Church. Michael worked as a Credit Manager for Gast Manufacturing for more than 25 years before his retirement. He then enjoyed seasonal work for Michigan State parks, most recently as a Park Ranger for Van Buren State Park.

Michael had a passion for bowling, He was given his first bowling ball at the age of five and has bowled for more than 65 years. He also was the association manager for the Southwest Michigan Bowling Association. Michal also enjoyed watching NASCAR and spending time with his family.
Michael is survived by his wife of 49 years, Cynthia Hallman of Coloma; daughter Angela Hallman of South Bend, IN; son-in-law Dan Sanchez; grandchildren, Tyler Zachary, Adrianna (Jason) Veenstra, Ryan Zachary and Gabe King.

Michael was preceded in death by his parents, Roy & Elsie (Kesterke) Hallman and daughter Kristie Sanchez.

Receive notifications about information and event scheduling for Michael

Posted Mar 18, 2020 at 01:06pm
I'm sorry to hear this Cindy. Mike was a great guy. I remember my dad picking us up from Fort Knox when we came home on leave. We laughed at our haircuts and questioned coming home because of them.
Comment Share
Share via:
S

Posted Mar 18, 2020 at 10:49am
So sorry to hear of Mike's passing. He will be missed. I was privileged to know and work with him these last 2 years on the bowling board of directors.
Comment Share
Share via:
SM

Posted Mar 18, 2020 at 09:33am
Susan and I were so saddened to hear of Mike’s passing. We were fortunate to have been able to meet Mike, and so enjoyed his friendship. Our hearts, and prayers go out to Cindy, Angela and Family at this difficult time.
Gregg and Susan Miller
Comment Share
Share via:
CF

Posted Mar 18, 2020 at 08:34am
My heart is so heavy of losing such a great man. Had many great times bowling, after bowling parties and the Credit Union dances. Worked with him at Gast and he was always kind to everyone. Cindy and family I pray for your strength during this time. Love to you always, Cindy Fannin.
Comment Share
Share via:
TF

Posted Mar 18, 2020 at 07:29am
With loving memories of Michael Hallman. With love the Miller Family. 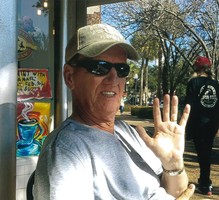