To share your memory on the wall of Maryrose Pappa, sign in using one of the following options:

Graveside services will be held 2:00 P.M. Tuesday, March 23, 2021 at Riverside Cemetery in Three Oaks. A Celebration of Life Service will be planned and announced this summer when COVID restrictions are eased. Memorial donations in Maryrose’s name may be made to the River Valley Senior Center, 13321 Red Arrow Hwy., Harbert, MI 49115. Those wishing to sign Maryrose’s Memory Book online may do so at www.starks-menchinger.com.

Maryrose was born October 25, 1932 in Chicago to Austin & Evelyn (Kaemerer) Steeves. She graduated from Fenger High School in Chicago, Class of 1950. On May 21, 1955 , she married Russell F. Pappa in Chicago. Maryrose dedicated her life to her family. She was an avid sports fan and attended all of her children’s and grandchildren’s sporting events whenever possible. Maryrose was a member of the first ladies fast-pitch traveling baseball team in Chicago, on which the movie A League of Their Own was based. While wintering in Florida, she worked for many years at Disney World in the gift shop. She will deeply missed by her loving family.

Receive notifications about information and event scheduling for Maryrose

We encourage you to share your most beloved memories of Maryrose here, so that the family and other loved ones can always see it. You can upload cherished photographs, or share your favorite stories, and can even comment on those shared by others.

Posted Mar 23, 2021 at 06:56pm
Was saddened to hear of the death of this fine lady. I recall meeting her on several occassions while hanging with Steve and Pam in the early '90s. Lots of laughter and love in this tight-knit family. John Rorabeck, Berrien Springs.
Comment Share
Share via: 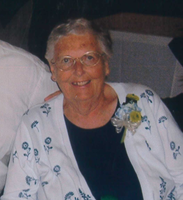