To share your memory on the wall of Marvin & Gretchen Koch, sign in using one of the following options:

Marvin Harold Koch was born July 1st, 1932 in Town of Lake (Milwaukee), Wisconsin to Frederick and Lillian (Vogt) Koch. He was baptized as a child of God at St. Peter's Evangelical Lutheran Church and confirmed his Christian faith at Resurrection Evangelical Lutheran Church, both in Milwaukee. He graduated from Bay View High School, Milwaukee in 1950 and went on to the University of Wisconsin Milwaukee to study music education.

Gretchen and Marvin met while at the University of Wisconsin Milwaukee where they both obtained their Bachelors in Music Education. Marvin then served his country in the United States Army, stationed in Germany. The two joined in Holy Matrimony on June 30th, 1956 in Kaiserslautern, Germany. From this union, they were blessed with three sons: Martin Paul, Marcus Fredric and David Theodore.

Music embodied their professional and personal lives and both became expert music educators and performers. This led them both to advanced degrees, with Marvin earning a Masters and PhD and Gretchen a Masters, all from Northwestern University. Marvin taught instrumental band and choir at Racine Lutheran and Lakeside Lutheran High Schools in Wisconsin, Concordia College and Naperville Public Schools in Illinois. He also directed the Chicago Area Lutheran Festival Chorus and the Arlington Heights Community Concert Band in Illinois. Gretchen was a piano instructor at Northwestern University and at Evanston High School. She also served many years as church organist and accompanist. They spent the entirety of their lives focused on their Christian faith, their family and their music. Additionally, they had the opportunity to travel extensively.

A Celebration of Eternal Life will be held Saturday, January 9th, 2021 at St. Paul’s Evengelical Lutheran Church, 2673 W. John Beers Rd. in Stevensville, Michigan with visitation at 10am, service at 11am, and burial to follow.

Memorial donations may be made to: St. Paul’s Evangelical Lutheran Church in Stevensville, Michigan or WELS Lutherans for Life in West Allis, Wisconsin. Those wishing to sign the Koch’s Memory Book online may do so at www.starks-menchinger.com.

Receive notifications about information and event scheduling for Marvin & Gretchen

We encourage you to share your most beloved memories of Marvin & Gretchen here, so that the family and other loved ones can always see it. You can upload cherished photographs, or share your favorite stories, and can even comment on those shared by others.

Posted Jan 09, 2021 at 11:00am
Nothing but awesome memories of Mr. and Mrs. Koch. Spending time with them after school at Jerusalem. Their son Marcus and I were best friends. Heartfelt condolences to Marcus and the Koch family.
Comment Share
Share via:
DG

Posted Jan 08, 2021 at 08:02am
Now they live together in the Lords house with his kindness and love. God Peace be with you all.
Comment Share
Share via:
ME

Posted Jan 05, 2021 at 06:30pm
Such bittersweet times. We will surely miss Marvin and Gretchen. but are filled with joy for them, enjoying eternity with Christ. Unfortunately, I will not be able to attend on Saturday, but I plan to watch the service. Marvin was such a special cousin to us. And being older than us, he told me interesting things about Grandma and Grandpa Vogt, especially their house, that I never would have known otherwise. The first time I met Gretchen, I knew she was very special. I enjoyed being with them throughout the years. And, of course, being a cousin to both Paul and me, made our times together extra special.
Comment Share
Share via: 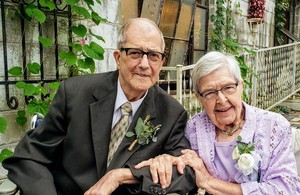