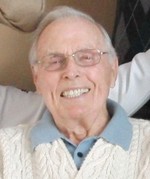 One of five siblings, Marshall and his family made it through the Great Depression, living in various places in Southwest Michigan, and he graduated from Buchanan High School in 1938. That fall he joined the United States Navy. His time in the service saw the start of World War II, leading him to all theaters of the war including the Atlantic and Pacific, aboard many different ships. After 7 years, he was honorably discharged as a Chief Pharmacist’s Mate in 1945. Marshall was the recipient of a Purple Heart Medal and Bronze Stars.

His career in pharmaceutical supplies included a great deal of travel, and Marshall was responsible for serving hundreds of doctors and hospitals in the tri-state area. After his retirement, he worked in Medical Supplies at Memorial Hospital (now called Spectrum Lakeland) in St. Joseph, revamping the inventory control process to save millions of lost dollars.

Childhood: A family of 7 during the depression meant recycled bathwater, recycled clothing (his first non-hand-me-down footwear consisted of his Navy issued boots), and the family often ate what he hunted going to and from school (storing his rifle and game in his school locker).

Military Service: Before the US was officially part of WWII, we were secretly transporting British troops on our ships. Marshall also has details to prove the US knew Pearl Harbor was going to be attacked, but did nothing. This tragedy angered the country to the point of wholeheartedly agreeing to declare war. Also, Marshall’s knowledge was used in the book “Kaiten,” a story about the Japanese secret manned suicide submarines. It was a Kaiten that attacked the USS Mississinewa. During the recovery process of his fellow sailors, Marshall discovered the body of the Japanese pilot. This information helped put together the puzzle pieces of this horrific event.

Hobbies: Marshall enjoyed golf as a member of Berrien Hills Country Club and Point O’ Woods (a founding member of POW). Hunting was a way to “put food on the table” during his youth, and a bonding experience well into his 80s with sons, grandson, and great grandson. Another way to stock the freezer was fishing with his youngest son, a charter captain. All the hunting experience helped Marshall become an expert marksman in skeet shooting. He spent countless hours at the Berrien County Sportsman’s Club. And after he lost the vision in his dominant right eye, he practiced tirelessly to shoot using his left eye.

Arrangements are being handled by Starks Menchinger Funeral Services. Because of the pandemic, visitation will not be held. The family will have a private memorial service, which will be recorded and available after November 21 for viewing on the funeral home website. In lieu of flowers, please consider making a donation in Marshall’s memory to Berrien County Sportsman’s Club, or the charity of your choice. Those wishing to share a memory of Marshall online may do so at www.starks-menchinger.com