To share your memory on the wall of Marian Hogue, sign in using one of the following options:

Print
Marian Ruth Rabe Hogue of St. Joseph, passed away peacefully on Monday, Dec.7, 2020 at Hanson Hospice Center at the age of 104.

Marian was born on February 20, 1916 to Carl and Wilma Rabe. One of six daughters, Marian grew up in St. Joe ... Read More
Marian Ruth Rabe Hogue of St. Joseph, passed away peacefully on Monday, Dec.7, 2020 at Hanson Hospice Center at the age of 104.

Marian was born on February 20, 1916 to Carl and Wilma Rabe. One of six daughters, Marian grew up in St. Joe on Harrison Avenue. She graduated from Trinity Lutheran grade school and then from St. Joseph High School in 1934. She played an active role with her high school reunion committee and was the last remaining member of her high school graduating class. She and her sister, Dorothy, worked in Gillespie’s Drug store throughout their high school years. As a young working woman, Marian was a buyer and manager for Rimes Department store in St. Joe. She was one of the earliest members of the Women’s Service League where she remained a lifetime member.

In 1942, during World War II, Marian married the love of her life, Dale C. Hogue. Following the war they opened a retail store in downtown St. Joseph, Carroll Crafts and Flair. Known as the place to go for gifts and fashion, the store was an early leader in design. The store opened on Main Street, moved to 505 Pleasant Street, and later to State Street. Together in business and in life, Marian and Dale, successfully ran their retail store for 48 years. As merchants in their beloved St. Joe, both were strong promoters of St. Joseph Today and active in attracting downtown tourists to the beautiful community they called home all of their lives.

The most important things in Marian’s life were her family, her business and her unwavering faith in God. An excellent seamstress, Marian enjoyed sewing throughout her life. Fabric and design provided a creative outlet for her to the benefit of her entire family.

Marian was preceded in death by her parents, her husband, five sisters and her son-in-law.

A private celebration of life service will be held at a later date. Burial will take place at Riverview Cemetery. Memorial donations in Marian’s name may be made to Misericordia Home, 6300 N. Ridge Blvd, Chicago, Il.60660 or Peace Lutheran Church, St. Joseph. Those wishing to leave an online condolence may do so at www.starks-menchinger.com. Arrangements have been entrusted to Starks & Menchinger Chapel & Cremation Services.

Receive notifications about information and event scheduling for Marian

We encourage you to share your most beloved memories of Marian here, so that the family and other loved ones can always see it. You can upload cherished photographs, or share your favorite stories, and can even comment on those shared by others.

Posted Dec 15, 2020 at 12:08pm
I have so many cherished memories of my dear Aunt Marian, so hard to write about just one. When I became engaged to my beloved, my Aunt Marian and Uncle Dale said they wanted to have an engagement party for us. Oh my, and did they ever. It was elegant with tables set up for intimate dining, beautiful decorations and amazing food. Every detail touched by their love for me. I am ever so grateful for having them both in my life. The last time I visited with my Uncle Dale I reminded him that he was always my favorite uncle. He said he knew that. I had a nice 3 day visit with my Aunt when she was still in her own home and I thanked her for all the special things she did for me and told her that next to my own mother she was the dearest of women in my life. I will carry memories of her with me for all my days. I'm spending my day today lifting up her dear daughters in prayer.... my cousins Jannean and Merrily.
Comment Share
Share via:
BW

Posted Dec 09, 2020 at 04:20pm
Jannean and Merrily, I have such fond memories of your Mom. First, as a member of Trinity, later as a customer of Carroll Crafts and then lastly as a fellow member of Peace Lutheran Church. I will always remember her as a kind and gentle lady. I pray that your loss will be replaced by wonderful lasting memories that you have within you. God's Blessings. Barb Kuball Walker
Comment Share
Share via:
JB

Thank you, Barb - your memories are very dear to us.
RB

Posted Dec 08, 2020 at 08:05pm
Jannean & Merrily:
Sincere sympathy to you and your families on the death of your mom.
We will, of course, always remember the connection of our families because of the connection of your mom and mine, the last two members of SJHS class of '34.
May you draw comfort and strength from the fact that your mom has now completed her baptismal journey.
"Rest eternal grant her, O Lord, and let light perpetual shine upon her."
Bob Burke
Comment Share
Share via:
MS

Thank you, Bob. Yes, feeling peace and comfort knowing that our beautiful mother is now in her heavenly home surrounding by family and friends who have been awaiting her arrival!
JB

Thank you, Bob. That connection between our moms & now the next generation has always been special to us. Your reminder that Mom’s baptismal journey is complete is a comfort and indeed we are filled with thanksgiving and at peace. 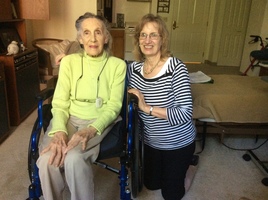 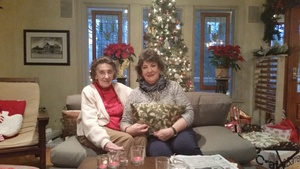 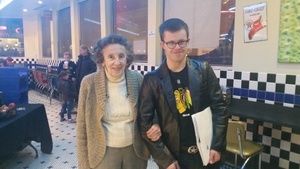