To share your memory on the wall of Maria Melcher, sign in using one of the following options:

Maria was preceded in death by her parents, Ambrosio and Cruz; her brothers, Reyes, Filiberto, Leandro, and Ambrosio; her beloved sister, Leoncia; and her infant grandson, Washburne Robert Melcher. She leaves behind her husband of 51 years, Robert Melcher and sons David Melcher {and his wife Susan and daughter Mara Mayhem Melcher), and Andrew Melcher {and his son Maddox Gray Melcher); and numerous nieces and nephews. Maria's family is thankful for the love and care provided by Caring Circle Hospice and the extraordinary caregivers from Right at Home, Ashlie MacGregor and Sheila Moore.

Cremation has taken place and a memorial service will be held in the future, when conditions permit. In lieu of flowers, please make memorial donations to Pilgrim Congregational UCC, 1200 West Glenlord Rd, St. Joseph, Ml 49085 or www.pilgrimstjoe.org

Those wishing to leave an online condolence may do so at www.starks-menchinger.com. Arrangements have been entrusted to Starks & Menchinger Chapel & Cremation Services.
Read Less

Receive notifications about information and event scheduling for Maria

We encourage you to share your most beloved memories of Maria here, so that the family and other loved ones can always see it. You can upload cherished photographs, or share your favorite stories, and can even comment on those shared by others.

Posted May 05, 2021 at 04:32pm
Brother Bob: How sad I was to hear that you lost your life's mate; yet I realize that it must be bitter sweet. My deep sympathy to you and yours. Bill and I were together for 52 years so I know the ache in your heart is deep. I will always remember Maria's beauty -inside and out. Sweet, smart, compassionate, thoughtful, caring and oh, what a great administrative mind. Whirlpool benefited from her talent in so many ways! The Pilgrim Family was blessed by her presence and participation. How dearly she is missed.
May the Lord Jesus whom we worship bless you with His Presence and may His Holy Spirit comfort and sustain you in the life adjustments that come with great change.
Claudia and I are neighbors in The Villas in Benton Harbor. We both miss the unity of family we once owned at Pilgrim and hold dear those memories.
Please continue to sing His Praises in your head, heart and with your voice. He has blessed you with such a marvelous voice.
Ann Wilkinson Hunnell
I have recently remarried and am living in The Villas in Benton Harbor.
I pray that the Lord Jesus whom you and I love and worship will be very near you in the next year and may His Holy Spirit comfort your heart and mind. Praise be to our Heavenly Father who has given us a New Birth into a Living Hope. This Living Hope in our Resurrection and eternal life with Christ Jesus and our loved ones carries us through our grieving.
May you ever continue to praise our Lord in song both in your heart and with that marvelous voice you've been given. You and the true Pilgrim Family are ever in my heart. Claudia and I are now neighbors. Love, Ann Wilkinson Hunnell
Comment Share
Share via:
EG

Posted May 04, 2021 at 04:53pm
I have fond memories of spending time at Grand Mere beach with the Melcher family. Maria reminded me so much of my mom - Lupe Hopp - which I appreciated, as it's not often you run into many St. Joe residents from Mexico :-) I imagine the two of them reuniting in heaven and just having a ball! Sending prayers of peace to your family during this difficult time, Emily (Hopp) Gibiec
Comment Share
Share via: 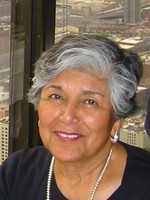