To share your memory on the wall of Madeline Bentley, sign in using one of the following options:

Arrangements are entrusted to Starks & Menchinger Chapel, St. Joseph. Memorial donations in Madeline’s name may be made to the St. Joseph-Lincoln Senior Center. Those wishing to sign Madeline’s Memory Book online may do so at www.starks-menchinger.com.

Madeline was employed for many years in managerial positions in New York, Pennsylvania, and Minnesota; including the first woman credit manager with Goodyear Corporation. After moving to St. Joseph, she and John owned & operated Land of Dreams Waterbeds in Benton Harbor. Madeline was an active member of the St. Joseph-Lincoln Senior Center, including 13 years on the board of directors and 8 years as president of the board. In her free time, she enjoyed playing bridge, knitting, and computer games. Madeline was of the highest integrity in whatever she did; and most of all, a wonderful wife, mother, and grandmother.

Receive notifications about information and event scheduling for Madeline

Print
Memorial Donations in Madeline's name may be made to the St. Joseph-Lincoln Senior Center There are no services planned at this time.

We encourage you to share your most beloved memories of Madeline here, so that the family and other loved ones can always see it. You can upload cherished photographs, or share your favorite stories, and can even comment on those shared by others.

Posted Apr 03, 2021 at 08:40am
Aunt Madeline, I will miss you and our long conversation, your mentoring, guidance, and words of encouragement. You were a blessing and an influence on the values I hold today. You and uncle John are gone now but that emptiness is filled with positive happy memories.

Love you both
Marty

Posted Mar 25, 2021 at 11:27pm
God bless you Madeline. I will always love you and miss you. It was such a pleasure knowing you.
Comment Share
Share via:
JR

Posted Mar 25, 2021 at 12:45pm
I had the privilege of getting to know Madeline over the past few years ...she became a very good friend and neighbor. She was such a kind soul ...I will forever miss you! Tell John I said Hi......Hugs and Kisses!! Bless you Sweet Madeline! Your friend always .....Julie
Comment Share
Share via: 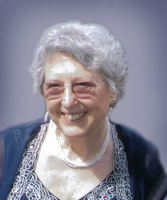