To share your memory on the wall of Leonard Smith, sign in using one of the following options:

A Celebration of Life Service will be held on Saturday, January 11, 2020 at... Read More
Longtime Bainbridge Township Supervisor Leonard C. (Larry) Smith Jr. died December 10, 2019 at Hanson Hospice Center after a brief battle with cancer. He was 86.

A Celebration of Life Service will be held on Saturday, January 11, 2020 at 4:00 p.m. at Fairplain Presbyterian Church, 210 W. Napier Avenue, in Benton Harbor. Visitation will be at the church where friends may call from 2:00 p.m. to 4:00 p.m. prior to the service. Memorials may be made to the Hanson Hospice Center or Area Agency on Aging - Campus for Creative Aging. Friend wishing to send a condolence may do so at the guestbook at www.starks-menchinger.com. Arrangement entrusted to Starks & Menchinger Chapel.

He is survived by his wife, Pat; daughters Kim Edinger of St. Joseph; Vicki VandenBerg of Grand Rapids; and Laura Sparks of Boulder, CO; seven grandchildren (Kristin, Jaclyn, Emily, Anna, Hannah, Michael and Betsy); two great grandchildren (Owen and Eva); and a sister, Sharon Pittman, of Chicago. He was preceded in death by his brother David.

A native of Chicago, Larry and his parents moved to a farm on Napier Avenue in 1951. Larry later built a home next door where he and Pat raised their family. Larry was a fruit farmer, and was especially known for his apple crops, which were always put to good use as the family annually would gather to make applesauce with a portion of the harvest.

Larry met Pat while both were attending Lawrence College in Appleton, WI, but they transferred to Michigan State for their upper class years. Larry graduated from Michigan State in 1951 with a degree in horticulture.
Smith served as supervisor of Bainbridge Township for more than 30 years. At the time of his retirement, he was the longest serving township supervisor in Berrien County. After leaving that post, Smith continued to serve as township assessor.

Larry got his start serving the public when he served as board president of the former Spinks Corners School Board. He was twice president of the Michigan Townships Association, and he served on the board of the Area Agency on Aging for 31 years. Larry was also an avid sailor, and even served as commodore of the St. Joseph Yacht Club – while never owning a boat!

Larry was a member of the Fairplain Presbyterian Church, and served on its building and grounds committee for several years.

While he never preached politics, Smith was a Republican through and through. As one longtime GOP county official once remarked: “Larry carried a lot of water for the elephant over the years.”
Larry had a myriad of professional associations and hobbies, and in each he had countless friends. Whenever there was a gathering of one sort or another – be it a state fruit growers meeting or political convocation or hobby convention – at the center of most groups was a big guy in a button down blue dress shirt with a crewcut talking with friends or turning strangers into friends with an attentive ear and kind words.
Aside from his family, one of his greatest passions was trains, and model railroads in particular. He was part of a model railroad club which began in Benton Harbor in the 1960s, and he later was an integral part of a round-robin group of model railroaders who would work and operate each other’s layouts. He was quick to share his knowledge of trains with others.

Another love for Larry was sports. When one thinks of the classic diehard Cubs’ fan, Larry would be near the head of the line, along with Pat. They attended games at Wrigley Field as often as they could, and when they couldn’t journey to the north side of Chicago, the tv would be tuned to the Cubs. When the Cubs finally broke the 71-year jinx of the billy goat in 2016, Larry was ecstatic he no longer had to tell acquaintances “wait ‘til next year!”

Larry’s loyalty to the Cubs was unquestioned, but the Bears and Black Hawks as well as the Benton Harbor Tigers, held special places for him, too. However, sharing the #1 spot in his heart was Michigan State University, and especially the Spartans’ athletic teams.

After graduation, both Pat and Larry continued to “bleed green.” The couple went to many MSU football games with a group of Twin Cities friends, starting with a tailgate and then the game itself (although a number of the wives would end up shopping at nearby Jacobson’s department store instead of going to the game). Win or lose, it was a fun and cherished time to be together with friends and family.

Larry’s passion for MSU continued when he, along with a core group of Spartan faithful, decided there needed to be an outlet for fans of the Green & White in the summer. But they didn’t want a stuffy and pricey alumni outing. “What do Spartan fans want?” he asked. “Beer and steak.” That was the genesis of the Spartan Steak ‘n’ Suds outing every June, which Larry co-chaired for years. The event turned into what MSU officials called the largest annual alumni outing in the U.S. Many Berrien County residents who graduated from other universities would routinely attend the MSU event, citing the laid back and fun atmosphere.
As someone who asked not to be identified noted: “If you weren’t a friend of Larry Smith’s, it’s only because you hadn’t yet met each other.”
Read Less

The family has not designated a preferred charity at this time, however if you would like to make a donation to a charity of your choice, click here. You will be redirected to a donations website. Please note, donation tributes are not able to be captured on the Tribute Wall.

We encourage you to share your most beloved memories of Leonard here, so that the family and other loved ones can always see it. You can upload cherished photographs, or share your favorite stories, and can even comment on those shared by others.

Posted Jan 11, 2020 at 01:51pm
Larry will forever be remembered for his contributions and wonderful friendship to the Area Agency on Aging. His enthusiasm and steadfast support was so appreciated - truly a blessing. Personally I will always remember and cherish his smile, sense of humor and practical, insightful advice and leadership.
My sincere condolences to Pat and the family on the passing of this wonderful man,
Lynn Kellogg
Area Agency on Aging
Comment Share
Share via:
B

Posted Dec 17, 2019 at 08:12am
Larry and I shared board duties for Area Agency on Aging for more than 20 years. It was a great team effort. I could always count on Larry to add a comment or another way to get things done. He worked tirelessly to renovate the old school into the current building on Lakeview which houses the agency.Always positive...always a Spartan fan. He will be missed.
Barb Farris
Comment Share
Share via:
HM

Posted Dec 15, 2019 at 03:23pm
So sorry to hear of Big Larry's passing. I met Larry at the St Joe Yacht Club. After you met him you were a friend. He will be missed.
Sincerely. Yogi and Larry Marshall.
Comment Share
Share via:
DC

Posted Dec 15, 2019 at 07:02am
As a kid in the 50’s, I remember Larry coming to my Dad’s repair shop. Regardless of my age, Larry always included me in their conversations. As I grew older, I realized what a great man he was. All of my memories of Larry were positive. He will surely be missed.
Comment Share
Share via: 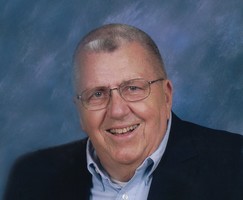