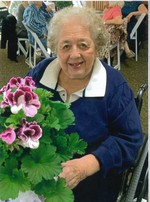 Judy worked at Hackley Hospital for 36 years only to retire in 2003. When the forth love of her life arrived, Jaxon, and then be blessed one month later with Kailey Rae, she declared it was time to be a grandma. Before her retirement, she was an avid bowler with her Hackley pals, sponsored by Monroe Custom Campers. She was also a member of the “girls club,” which was made up of her East Broadway girlfriends from high school, who met faithfully once a month.

In 1986, Judy & Jim moved to Walkerville, MI, to their beloved School Section Lake. Judy remained there for the rest of her life. Sitting on her deck, watching her grandbabies playing on the shore and telling us how much she could smell Jim’s cigarette smoke. Judy’s greatest love was Jim and Jim’s greatest love was Judy. They were the perfect pair.

Due to the current circumstance a memorial service will be held at a later date. Those wishing to leave an online condolence may do so at www.starks-menchiner.com. Arrangements have been entrusted to Starks & Menchinger Chapel & Cremation Services.