To share your memory on the wall of Joseph Scrima, sign in using one of the following options:

After being honorably discharged from the U.S. Army, Joe moved to Michigan in 1958 with the Remington Rand Typewriter Company. Joe’s other skills were soon realized in the starting of his first business, Edisan’s Shoes, in downtown St. Joseph in 1960. For 25 years he served the community with children’s shoes and eventually the creation of custom orthotics. He was the only pedorthist in the area for many years and helped many people walk and run without pain, as well as correcting many growth-related problems in children. The shoe store sadly was lost to a fire in 1985 and Joe eventually started his second business, the Eye Care Outlet in 1993. In this new endeavor he helped people with vision challenges and was successful, especially in his ongoing primary mission in life, of bringing hope and joy to those he met.
Joe was a member of the St. Joseph Catholic Church for over 60 years, and was a sacristan. He shared his faith with many through jail and prison ministries, the Knights of Columbus, Cursillo, St. Vincent DePaul Charities, Special Olympics, 4-H, Therapeutic Equestrian Services and many more. He mentored and cared for many, in many ways, and that is his most important and enduring legacy. His final act of helping others was donating his body to the Western Michigan University School of Medicine.

A Memorial Mass will be held at 2 p.m. Saturday, July 18, at St. Joseph Catholic Church in celebration of his life, and a memorial drive-thru procession will immediately follow at the Rose Center. For more information, please email drscrima@comcast.net or to leave a memory, visit his memorial page at https://www.memories.net/page/6790/joseph-scrima#!/. If you would like to make a donation in Joe’s memory, please visit the Berrien County 4-H Organization at https://www.canr.msu.edu/4h/support_michigan_4_h or by check to St. Vincent De Paul Charities, 220 Church St., St. Joseph, MI 49085.
Read Less

Receive notifications about information and event scheduling for Joseph

We encourage you to share your most beloved memories of Joseph here, so that the family and other loved ones can always see it. You can upload cherished photographs, or share your favorite stories, and can even comment on those shared by others.

Posted Jul 15, 2020 at 04:46pm
Happy Birthday Uncle Joe!
I know you are Heaven's newest angel...give grannie a hug for me!
Love you forever,
Ann
Comment Share
Share via:
JS

Posted Jul 08, 2020 at 07:24pm
To Mark and the girls, my heart goes out to you all and to Joe’s widow. I haven’t had the pleasure of meeting you but Joe was an amazing man with God’s love shining through his eyes, smile and heart. No words can express my sorrow at this time but know that My thoughts Are with you all. Another Angel is gracing those streets of Gold. Hallelujah. Joe will definitely be missed by many. God bless you all.
Comment Share
Share via:
DT

Posted Jul 08, 2020 at 06:52pm
Amy, I was so sorry to read about your dad's passing. I didn't know him, but it sounds like he was a wonderful man who contributed a lot to this world. I know you'll miss him and my prayers are with you and your family. 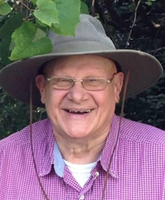