To share your memory on the wall of John Kronos, sign in using one of the following options:

A private family service will be held at Lincoln Township Cemetery, with a public Celebration of Life Service to be announced a... Read More
John C. Kronos, Jr., 94, of Stevensville, passed away on Friday, April 24, 2020, at Cartel Inns of Lakeland.

A private family service will be held at Lincoln Township Cemetery, with a public Celebration of Life Service to be announced at a later date. Memorial contributions may be made to Al-Anon in Stevensville. Those wishing to leave an online condolence may do so at www.starks-menchinger.com.

John was born on January 5, 1926 in St. Joseph to John Sr. & Martha (Bueack) Kronos. He grew up on his family’s farm in Stevensville. John enlisted in the U.S. Navy in 1943 and proudly served his country before he was honorably discharged. He returned to school and graduated from Stevensville High School, Class of 1947. He then married the love of his life Arlene Marks on June 17, 1950 in St. Joseph. John worked as a Welder for Whirlpool before his retirement. He was a proud member of the Stevensville American Legion, St. Paul’s Lutheran Church and Al-Anon Club of Stevensville. John enjoyed riding his BMW motorcycle, traveling and camping in his camper with his family.

John was preceded in death by his wife Arlene on August 19, 1997, his parents, and two sisters, Joan Pelkey & Mildred Peterson.
Read Less

Print
Private Family Services will be held with a public Celebration of Life Service to be announced at a later date. Memorial donations in John's name may be made to Al-Anon in Stevensville.

Plant a Tree in Memory of John
Plant a tree
0 trees have been planted in memory of John C. Kronos Jr.
CP

Posted May 06, 2020 at 10:14am
Susie and Linda I am so sorry to hear of the passing of Uncle Johnny. I have many memories of him and being at his house and playing "school" in the basement and playing "house " out in the barns out back! And having him and my Mom, (his Sister) come visit pulling in my driveway on his motorcycle! God bless, Sherry
Comment Share
Share via:
DG

Posted Apr 28, 2020 at 02:43am
Sue and Jim and family. We are so sorry to hear this news. Your Dad was such a sweet man. I know you all have wonderful memories of a life well lived. I am sure he is proud of the legacy he leaves behind in his children, their spouses, his grandchildren and great grandchildren. He will live on in the hearts and cherished memories of all whose lives he touched. Sending you prayers for strength and comfort during this difficult time. Big hug to you all. RIP Sir
Comment Share
Share via:

Posted Apr 27, 2020 at 09:31pm
John was a constant kind hearted helpful man. He was always there with encouraging words for me. He shared a story with me while he was welding metal seats on some ice cream chairs my late mother had given me. In conversation I learned that John had worked for my 2 late uncles, William Smith and Larry Smith of Smith Steel before he was employed by Whirlpool.
John was a sweet man who always spoke highly of his family.
I shall miss him,
Caryn Gifford...friend
Comment Share
Share via:
AH

Posted Apr 27, 2020 at 07:51pm
We are so sorry for your loss. It’s been an absolute pleasure being Johns neighbor for the last four years. I’ll never forget, soon after we moved in, he came over with a fist full of dandelions. Not as a gift, but to let us know in the kindest way, that we were the reason he had them in his yard. He also offered to help us out with any welding project we had in mind.
We’re going to miss him and his graciousness. We feel so fortunate to have met him.
Our thoughts are with you at this time.
Anita & Ryan

Posted Apr 25, 2020 at 11:15pm
Sue, Jim, and family, we're sorry for the loss of your father. May you have peace and many happy memories of time together with him.
Sincerely,
Corky and Jeannie
Comment Share
Share via:

Sorry for your loss of John. May you have many great memories and thank you John for your service. 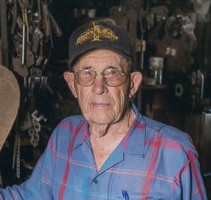