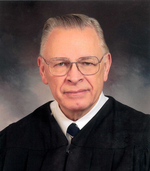 Cremation has taken place. A memorial service will be scheduled at First Congregational Church, St. Joseph, at a later date. Arrangements have been entrusted to Starks Family Funeral Homes, 2650 Niles Road, St. Joseph. The family has requested any memorials be made to the Salvation Army; PolioPlus, c/o Ann Arbor Rotary Foundation, P.O. Box 131217, Ann Arbor, MI 48113, (the international fund to eradicate polio) or a Hospice of the donor’s choice. Those wishing to leave an online condolence may do so at www.starks-menchinger.com.

John was born September 12, 1932 in Carson City, Michigan. Following graduation from Benton Harbor High School in 1950, John attended The University of Michigan graduating with a B.A. in History and Political Science in 1954. He received his J.D. from The University of Michigan in 1958 and joined his father (also a Michigan Law School graduate) in his Benton Harbor law practice. After passing the Michigan Bar, John married Elizabeth (Betsy) Ross, a marriage that lasted more than 62 years.

Shortly after admission to the Bar, John was appointed to defend a black handyman accused of molesting two little white girls. Though it was his first case, the habit of thorough preparation was already established and to the astonishment of everyone including his father, after a two-day jury trial, John won. He later noted “I was paid the princely sum of $35 and it was the sweetest $35 I EVER EARNED.

Six years after joining his father’s law practice, John was elected Berrien County Prosecuting Attorney, holding the office for four years. When the new Berrien County Court House opened in 1967, the first trial held was before Judge Philip Hadsell, with John as Prosecuting Attorney and Wilbur Schillinger as Defense Attorney. In 1968 at age 36, John was elected District Judge and began a 40-year career on the judicial bench which eventually made him the longest serving judge at that time in the State of Michigan.

The 1963 Michigan Constitution created the then new District Courts to replace the Justices of the Peace and other interlocking judicial systems. John was one of five newly elected judges selected to be on the influential Rules and Forms Committee, which created the basic framework of District Court procedures, most of which are still in place today.

For 20 consecutive years, John Hammond wrote at least one bill that was passed by the Michigan Legislature, signed by either the Democratic or Republican Governor in office, and became law. Supreme Court Justice Michael F. Cavanaugh praised John’s efforts in preparing the first volume of “Trial Court Bench Guides”, a quick resource for experienced judges and practical resource for judges handling unfamiliar cases in Michigan Circuit, District and Probate Courts.

John was part of a committee of three that wrote the Revised Code of Criminal Procedure that was passed in 1980, the first total revision of procedures since the 1930’s. He served as an instructor at the National Judicial College in Reno. When interviewed on 60 Minutes about an Innocence Project person, he brought instant clarity to a bogged down legally technical segment with the simple statement “The right he has, the right he has is not to have anybody excluded from his jury.”

Those who knew John professionally were proud to voice their opinion in support of his election. Retired Berrien County Circuit Court Judge William S. White said, “If the State of Michigan values Judge Hammond’s (judicial) experience enough to ask him to provide guidelines for the entire state, how could we in Berrien County do any better than to have this man sitting on our Circuit Court bench?”

Leo K. (Pat) Cook, retired Berrien County District Judge said, “I served side by side with John for twelve years. I consider his knowledge both of criminal and civil law to be almost unbelievable.” Retired Berrien County Clerk, Forrest H. Kesterke, stated “…it is essential that we place people of the highest integrity, principle, and strength of purpose in judicial offices. I sincerely believe you meet those criteria.”

Judge Hammond’s quote, “We get enough business here so we don’t need any more” is a good summary of his approach to the law. “Most people who end up before a judge do not want to be there. Handing out severe punishment to a ‘send a message’ is the antithesis of justice so a judge must discriminate between the first offender and a chronic repeat offender, between technical violations and malicious criminal behavior.”

Attorneys practicing before Judge Hammond appreciated that attitude and his thorough knowledge of the law. At the time of John’s retirement, Defense attorney Tat Parish said, “If you wanted him to carry a grudge, you’d have to work on it for years. He doesn’t carry grudges.”

Retired attorney Andrew Burch, who did criminal defense work, said, “I think most lawyers would agree, his knowledge of the law is superior, and in my opinion, he always tried to do the right thing. He was truly impartial.”

John Dewane, a practicing attorney since 1970 and a recently retired Berrien County Circuit Court Judge, said upon Hammond’s retirement, “Anytime anybody had any questions to what the law was or how it should be applied, Judge Hammond was certainly a person you could go to for information.”

John Hammond was admitted to practice before Michigan Courts, U.S. District Courts (Eastern and Western Districts), sixth Circuit Court of Appeals and the United States Supreme Court. He was a diplomate of the National Judicial College and a member of the American Bar Association, the State Bar of Michigan, the Berrien County Bar Association, and the American Judicature Society.

Judge Hammond served as President of the Michigan District Judges Association in 1984. He actively supported the State Bar as Chair of the Criminal Law Section, a Representative Assembly member, Council member for the Michigan Judicial Conference, member of the Committee on Criminal Jury Instructions, and Council member of the Family Law Section. He was a participating member of committees on Court Administration, Civil Procedure, Criminal Jurisprudence, District Courts, and Professional and Judicial Ethics. He was also a member of the Michigan Appellate Defender Commission, and after retirement served as a mediator.

He authored numerous articles on criminal law topics and the judiciary which were published in the state and professional publications and some of his case law decisions are cited in current law school textbooks.

John resigned from the office of Berrien County Circuit Judge in December 2004 when he reached mandatory age of retirement. He continued to work with the State Bar and members of the legislature to craft new laws based on his long judicial experience. Even those not enamored with Judge Hammond’s approach to the legal profession respected his encyclopedic knowledge. Those who realized the value of that knowledge were strong supporters.

Though John’s hobby was writing legislation, he was also a veteran amateur radio (ham radio) operator. He was a member of Rotary and liked golf, persevering even though saying it made all other frustrations seem insignificant.

John was preceded in death by his parents; his brother, James and his daughter, Karen Ross Hammond-Nash.

He is survived by Betsy, his wife of 62 years; their son, William (Bill) Hammond; granddaughter, Evelyn Nash; grandsons, Michael, Heath and Andrew Hammond and Sister Marjorie Hickman of Ashville, NC. He will be greatly missed by many friends and every citizen who values an upstanding and well-run legal system.