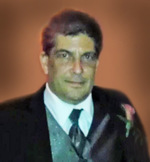 A Celebration of Life Service will be held 5:00 P.M. Saturday, October 24, 2020 at Starks & Menchinger Chapel, 2650 Niles Rd., St. Joseph, with Major William S. Cox officiating. Friends may visit with the family beginning at 4:00P.M. Saturday at the funeral home. Memorial contributions in Jeff’s name may be made to the Humane Society of Southwest Michigan. Those wishing to sign Jeff’s Memory Book online may do so at www.starks-menchinger.com.

Jeff was born August 14, 1964 in Pontiac, Michigan to Clifford & Janette (Doyon) Thomas. On November 28, 1987 he married the former Terri Bell in Clarkston, Michigan. Jeff was employed as a maintenance engineer at Hoosier Tank in South Bend. He was previously employed at Tube Form Solutions. Jeff was highly respected in his field for his vast knowledge & skills and was sought after by numerous other companies for that reason. There was nothing that he couldn’t fix or figure out and was always willing to help others in need. He was a modern-day MacGyver.

Jeff is survived by his wife Terri; two daughters-Kari (Ken) Climer of Benton Harbor, Kay Thomas of Sodus; his grandson and “the apple of his eye” Colson Jeffery Climer; his sister Rebecca Bolin of The Villages, FL; his brother Kenneth (Deborah) Thomas of Clarksville, TN; his sister-in-law Sherri Simko of Waterford, MI; his brother-in-law Jeff (Marcie Scott) Bell of Rochester Hills, MI; numerous nieces & nephews; and his canine companion Tucker. Jeff was preceded in death by his daughter Chelsea Thomas on March 23, 2010, his father Clifford, and his mother & stepfather Janette & Raymond White.