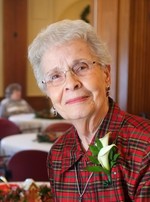 Jean was a graduate of Moore Township High School, Farmer City, IL class of 1943 and a graduate of Texas State Women’s College in 1947 with a degree in chemistry. On December 22, 1946 she married Robert “Bob” R. Smith in Farmer City, IL. She and Bob moved to Lansing, MI where she was a Lab Technician. They moved their family to St. Joseph in 1955 where Jean worked at Memorial Hospital as a Dietitian. She wanted to work as a nutritionist on the space mission project team; however, the company required prospective women employees for this project team to take a typing test. Jean asked if men were also required to take a typing test for this position. The answer was no. As a result, she decided to share her incredible math skills by becoming a teacher for the Benton Harbor Area Schools. When she and Bob moved to Flint, MI, she continued teaching math to GM workers so they could earn their GEDs. They moved to Richardson, TX for several years and then back to their beloved St. Joseph.

Jean was a member of St. Joseph First United Methodist Church for over sixty years. She served in many capacities during her years at the church, including volunteering at the Soup Kitchen.

The family appreciates the warm love and excellent care provided to Jean by dear friend Julie Lester, the staff at the Whitcomb (especially the second-floor angels and James) and Caring Circle Hospice.

Due to the current circumstance, a memorial service for Jean will be held at a later date. Memorial contributions may be made to the Alzheimer’s Association, 200 Turwill Lane Suite 6, Kalamazoo, MI 49006 or the St. Joseph First United Methodist Church, 2950 Lakeview Avenue, St. Joseph, MI 49085.Those wishing to leave a message of condolence for the family may do so online at www.starks-menchinger.com. Arrangements have been entrusted to Starks & Menchinger Chapel & Cremation Services.