To share your memory on the wall of Janice Gibson, sign in using one of the following options:

Due to current circumstances, private graveside services will be held. Celebration of Life Services will be announced at a ... Read More
Janice C. Gibson, 84, formerly of Harbert, passed away Friday, March 20, 2020 at Whitcomb Towers in St. Joseph.

Due to current circumstances, private graveside services will be held. Celebration of Life Services will be announced at a future date. Memorial donations in Janice’s memory may be made to the Daughter’s of the American Revolution- Algonquin Chapter or the Humane Society of Southwest Michigan. Those wishing to sign Janice’s Memory Book online may do so at starks-menchinger.com.

Janice was born December 24, 1935 in Minneapolis, Minnesota, the only child of F.A. & Eva (Hansen) Kitchen. She attended Chicago Public Schools and later earned her Bachelor’s Degree in Personnel & Industrial Psychology from Roosevelt University, and an Associate Degree in Dental Hygiene from Northwestern University. Janice also graduated from the Chicago School of Interior Design. She was employed as a Personnel Specialist at Consolidated Packaging Corporation and was the co-owner of Cameo Consultants on Dearborn Street. For many years she narrated North Shore fashion shows and modeled for several Loop Boutiques and was proud to serve on the Carson Pirie Scott College Fashion Board in the 50’s.

In 1966 in Chicago, Janice married Jack P. Gibson of Lakeside, MI. They made their home in Harbert from where she commuted on the South Shore to her office until her early retirement.

Janice was active in the American Association of Universities where she held a state office, the Daughters of the American Revolution, holding several offices, Monday Musical, New Buffalo Service League, Krasl Art Center, serving on the board of directors, and the President of the Friends Board, the Harbert Community Church, where she served on the board of directors for eight years, sang in the choir and taught Sunday School. Janice was elected to two four-year terms on the Chikaming Township Parks Board. Janice volunteered for Junior Achievement and the Literacy Counsel.

As a vocal talent, Janice lent her soprano voice to the Chicago Choral Club and the Chicago Symphony Women’s Chorus, the DAR State Chorus and many local chorus groups and choirs.

In her earlier years, Janice was an accomplished downhill skier. In 1962, she was crowned “Queen of the Chicago Metro Ski Clubs” in a ceremony at Morrison Hotel. She was nominated twice, and in 1995 included in a publication of Two-Thousand Noteworthy American Women.

Print
Celebration of Life Services will be announced at a future date. Memorial donations in Janice's name may be made to the Daughter's of the American Revolution - Algonquin Chapter or the Humane Society of Southwest Michigan.

We encourage you to share your most beloved memories of Janice here, so that the family and other loved ones can always see it. You can upload cherished photographs, or share your favorite stories, and can even comment on those shared by others.

Posted Mar 23, 2020 at 08:17pm
Such a beautifully written obituary!! I loved the many times I had the opportunity to talk with her, she always gave me such great compliments about myself and my kids! I will never forget how she used to back out of Bill's driveway into our yard, oh course not on purpose, but we always got a kick out of it! #memories
Comment Share
Share via:
CD

Posted Mar 23, 2020 at 07:39pm
The Driers and Halls are thinking of you. It seems like only yesterday your mom and I were watching you run from one house to another. Such wonderful memories of times that will never be again. I'm so glad I was able to visit in January. Your mom is now at peace. Love to you
Comment Share
Share via:
PD

Posted Mar 23, 2020 at 01:31pm
I am so sorry for the loss of your Mom. She was such a great person and I always enjoyed our conversation when we got together.She is with your Dad now and singing with the angels . Just know you are in our thoughts and prayers.
The Dimmitt family.

Posted Mar 23, 2020 at 12:01pm
Jack & Bill,
We were so saddened to hear of the passing of your dear mom. Know we share you sorrow at this most
sad time. When one loses a parent the world is never quite the same. May every cherished memory of your mom
bring you deep and lasting comfort in the days ahead. I'm sure now that she is with your dad she has him on the
run once again! LOL,
Sharon & Bob Stella
Comment Share
Share via:
DK

Posted Mar 23, 2020 at 10:23am
Jan was a friend and neighbor of ours at the Villas. I remember the times that I would take her Tosi’s cake, and she was overjoyed with having the cake. She told me she would have to hide it from Bill. Her excitement would warm my heart. Will miss this smart and strong willed lady. 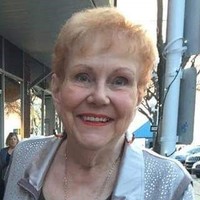