To share your memory on the wall of James \"Jim\" West, sign in using one of the following options:

Jim served his country in the US Navy for 12 years, making four tours to SE Asia during the Vietnam War. Upon leaving the Navy, he joined the US Coast Guard Reserves, where he assisted in the Search and Rescue team at Puget Sound for 10 years. Jim also returned to college after the Navy, earning an industrial engineering degree from Cogswell College in Kirkland, WA.

Jim worked for Boeing Aerospace for more than 25 years, but his passion was racing motorcycles. He was a member of the Washington Motorcycle Road Racing Association (WMRRA) for 20 years, competing in races throughout the Northwest. Jim loved coaching high school football and other youth sports, volunteering his time and talents. He was also a member of the Benton Harbor “Pray-re Riders” chapter of the Christian Motorcycle Association (CMA).

Jim and his family were members of Overcomer Covenant Church in Auburn, WA for many years. He also served as a chaplain for Racers for Christ. Upon his retirement from Boeing, Jim and Patti relocated to Saint Joseph, MI, where they are members of the First Church of God.

Jim was preceded in death by his parents, Frank and Pearl West, and by a brother, Norman Palmer. Surviving are his wife; a son, Christopher West of St. Joseph, MI; two daughters, Kara (Dave) Semer of Kent, WA, and Amanda (Kelly) Gage-Cole of Alpharetta GA; and four grandchildren: Eric Semer, Sean Semer, Morgan Gage-Cole, and Cody Gage-Cole. A memorial service will be held at a later date at Overcomer Covenant Church and his cremains will be interred at Tahoma National Cemetery in Kent, WA.

Arrangements have been entrusted to Starks & Menchinger Chapel and Cremation Service. Memorials may be made to New Heights, 2627 Niles Ave., St. Joseph, MI 49085. Those wishing to share a memory of Jim online may do so at www.starks-menchinger.com
Read Less

Receive notifications about information and event scheduling for James "Jim"

We encourage you to share your most beloved memories of James "Jim" here, so that the family and other loved ones can always see it. You can upload cherished photographs, or share your favorite stories, and can even comment on those shared by others.

Posted Jun 17, 2020 at 06:26pm
Patti, I can't even imagine how losing Jim is even tolerable, but your faith will sustain you somehow. Passionate prayers for you and the kids!
Comment Share
Share via:
JS 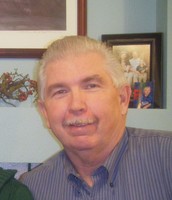