To share your memory on the wall of James Cassidy, sign in using one of the following options:

Print
James “Jim” Cassidy, 76, of Stevensville, passed away peacefully on Tuesday, March 30, 2021, at his home, holding hands with his wife, Judy, and after loving visits with children, grandchildren, and Pastor Andy Hannich.

Jim was an ac... Read More
James “Jim” Cassidy, 76, of Stevensville, passed away peacefully on Tuesday, March 30, 2021, at his home, holding hands with his wife, Judy, and after loving visits with children, grandchildren, and Pastor Andy Hannich.

Jim was an active member of the Washington Avenue Church of God, where a private memorial is planned with family members. Regrettably, due to Covid, a public memorial celebration will not be held at this time. Memorial contributions in his name may be made to Berrien County Victim Services Unit 811 Port Street 2nd Floor St. Joseph, MI 49085. Those wishing to leave an online condolence may do so at www.starks-menchinger.com. Arrangements have been entrusted to Starks & Menchinger Chapel & Cremation Services.

Jim was born at St. Anthony's hospital, in Michigan City, Indiana, on November 28, 1944, the son of Hugh and Ruth (Ferguson) Cassidy. Jim's great-grandfather, John from Ireland, settled in Michigan City, building his own home, in 1907. He graduated from Michigan City High School in 1961. While in high school, Jim played the saxophone in a jazz band, and painted murals for his senior prom. His creativity would be expressed throughout his lifetime, particularly with drawings and paintings, though it could be seen in everything he did. On November 21, 1975, he married Judy Washburne in Benton Harbor. Jim was a hard worked and enjoyed his work life and colleagues, which mostly involved some form of creative and collaborative sales. Jim enjoyed his clients; he could be trusted to keep their best interests at heart. His work at WSJM included the development of Wedding World and an on-air shopping show. Jim also worked in radio as a sales manager for WHFB. In addition, for many years Jim and Tom Ahearn owned a local barter business. Jim participated in numerous volunteer activities, including Blossomtime, Lest we forget, The Exchange Club, Victim Services, and efforts to procure a firefighter's simulator.

Posted Apr 06, 2021 at 07:02pm
Judy, we loved our talk the other night. So glad technology was able to connect us at this sad time. You know where we are. Don’t ever hesitate to reach out.

Posted Apr 06, 2021 at 09:25am
Judy,
Jim was a wonderful human being. We have many memories of Jim and his good works in our community. God bless you.
Mike and Joann Sepic
Comment Share
Share via:
LC

Posted Apr 05, 2021 at 12:19pm
We will always treasure our memories of Jim. He, along with Judy, have been neighbors and friends for many years. Truly, he was a remarkable man! Years ago, we loved listening to Jim on WSJM and especially appreciated his morning show with the steals & deals for sale. He was perpetually upbeat, positive and such a gentle soul. Seeing the two of them walking in our neighborhood, holding hands, smiling, and enjoying the natural beauty. They loved watching birds, ducks, squirrels, and the many deer in Grande Mere. Oh, how Jim will be missed by his family and many friends. Love you, Jim and Judy❤️
Comment Share
Share via:
JS 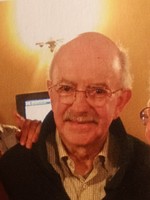