To share your memory on the wall of Irving Talbot, sign in using one of the following options:

A Celebration of Life Service will take place on Saturday, February 8, at 11 AM at Starks & Menchinger Chapel, 2650 Niles Rd., St. Joseph, with Pastor Ronald Schmidt officiating. Friends may visit with the family from 9:30 AM until the time of the service. A private family burial will take place at a later time at Prospect Hills Cemetery in Cassopolis. Memorial contributions may be made to Shriner’s Children Hospital. Those wishing to leave an online condolence may do so at www.starks-menchinger.com.

Bud was born on May 25, 1932, in Benton Harbor to Irving, Sr. & Erma (Patzlaoff) Talbot. He graduated from Benton Harbor High School in 1950 and continued his education at Ferris State University where he earned a degree is pharmaceutical science. After graduation, Bud proudly enlisted in the United States Army where he worked as an engineer and pharmacist in Korea. Once he returned home, Bud married the love of his life, Sally Connelly, on August 20, 1955, in Benton Harbor. In 1956, Bud & his brother, Roy, bought their father’s old pharmacy and renamed it Talbots Drug Store. In 1995, the drug store was sold to Rite-Aid but Bud continued to happily serve his community as a pharmacist for another 25 years until he retired at the age of 86. One of Bud’s most notable achievements was becoming The Imperial Potentate for the Shriners, he would travel every few days visiting all of the chapters in Michigan and getting to know all of the members on a personal level. Another passion of his was traveling the world, it would be hard to name a country he hasn’t been to. Bud would often times take his children and grandchildren with him on his worldly adventures. He was a proud member of Peace Lutheran Church, enjoyed golfing and going to Twin City Players to watch musicals with his family. Bud was an incredible, hard working and loyal man who loved helping people, he will be missed dearly by all who knew him.

We encourage you to share your most beloved memories of Irving here, so that the family and other loved ones can always see it. You can upload cherished photographs, or share your favorite stories, and can even comment on those shared by others.

Posted Feb 25, 2020 at 09:41pm
I spent time across the hall from Bud while he was at Pine Ridge and had the chance to stop in chat with my father. Thank you for granting his wish to go back home. It meant a lot to him.

Posted Feb 08, 2020 at 02:02am
I had been given a chance to go to the 1969 Boy Scout Jamboree. Mr Talbot loaded me up with film for the trip. I think he gave me 10 rolls. I took photos for three weeks all over the West on the way to and from Idaho. When I got back, he payed to develop the film. Yes I still have the pictures. Later as an adult he treated me as an adult even though I was just 20 and that surprise me. He listened. I graduated the same year as his daughter, Lynn. I wish I had an old photo of him to post and share. Would like to attend the visitation. I was really surprised to read that he kept working Until age 86! Who does that? Bud Talbot.
Roger Stevens
Brownsburg, IN
Comment Share
Share via:

He worked until he couldn’t. A few months ago he told me he’d work for free if they’d let him. He just enjoyed being there with the girls he worked with and filling scripts
CC

Posted Feb 07, 2020 at 05:26pm
Dear Talbot family, Buds Cousin Lorelei Patzlaff
Claeys and family sends our thoughts and prayers to you. We always will remember Bud and Talbots family. Special memories of Talbots drugstore And times together.
Comment Share
Share via:
LA

Posted Feb 07, 2020 at 08:26am
Uncle Bud, although you were never planted in one place, you were always growing. Rest in Peace, dear uncle. 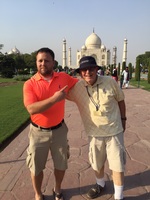 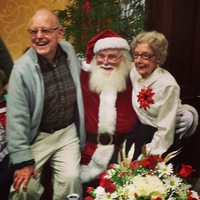