To share your memory on the wall of Herbert Reimers, sign in using one of the following options:

Print
Herb Reimers of St Joseph passed away on January 4, 2020 at the age of 96 in St Joseph Michigan. Herb was a man that many people loved.

Born on November 13, 1923 in Benton Harbor, Michigan he grew up on his family’s farm. After gradu... Read More
Herb Reimers of St Joseph passed away on January 4, 2020 at the age of 96 in St Joseph Michigan. Herb was a man that many people loved.

Born on November 13, 1923 in Benton Harbor, Michigan he grew up on his family’s farm. After graduating from Benton Harbor High School in 1942, he was inducted into the US Army. For 4 years, he was a “buck sergeant” and tank commander for the Cannon Company 40th Infantry Division 160th Infantry Regiment in the Pacific Theater of WWII. He spent 235 days in frontline combat. Fighting in Guadalcanal and the Solomon Islands. Herb received numerous awards including the bronze star, coincidentally on the very day that FDR died. It was important to Herb to educate people on the historical significance of WWII. His war stories were shared with many, young and old.

After returning from the war, he met Irene “Curly” Hintz, the love of his life. They were married in 1947 and enjoyed 67 years together. They began their careers owning a drive in and grocery store in Benton Heights on Territorial Road. Eight years later, Herb & Curly received their real estate licenses and developed 40 parcels of land in Southwest Michigan, including the subdivision where he lived for 64 years.
During that time, they had 3 children. For 35 years, they spent summer vacations in Sister Lakes and wintered in Englewood Florida for 45 years.

Family and church were very important to them. Herb was the last surviving charter member of Grace Lutheran Church in St Joseph. He served on almost every board and rarely missed a Sunday service, sitting on the right side, in the pew five rows from the front.

His YMCA family gave him support and enjoyment. He always said that his Y membership was the best Health Insurance plan, inspiring many members to stay physically fit. Herb was incredibly athletic his entire life, beginning as a Golden Gloves Boxing champ and playing racquetball and handball at the Y until he was 95. He enjoyed playing softball for the Grace Lutheran team, where he was the pitcher and pitched his last game at the age of 70. An avid water skier, replaced knees couldn’t slow him down, skiing until age 80!
Good health allowed Herb to enjoy his cabin in Iron River MI, going deer hunting until the age of 92. White Lake in Canada was his favorite Walleye fishing spot. He also enjoyed moose and bear hunting.
He is survived by his 3 children, Susan (Tom) Kehr, Sandy Reimers, and Randy (Monika) Reimers. Ten grandchildren: Brett, Tammi, Rob, Brooke, Bryan, Nikole, Greg, Daniel, David, Elizabeth, Justin and Zach and 14 Great Grandchildren.

He was preceded in death by his wife Curly, his brother Herm and sister Elizabeth.

2 Timothy 4:7; "I have fought the good fight, I have finished the race, I have kept the faith."

Donations can be made to Grace Lutheran Church or Lest We Forget. Those wishing to leave an online condolence may do so at www.starks-menchinger.com.
Read Less

We encourage you to share your most beloved memories of Herbert here, so that the family and other loved ones can always see it. You can upload cherished photographs, or share your favorite stories, and can even comment on those shared by others.

Posted Jan 09, 2020 at 09:20am
Sue. Sandy & Randy,
Lots of great memories from our Englewood, Florida vacations with your Dad and our families. DK remembers the early morning breakfasts at McDonald's. I loved listening to his stories about his time in the Service. He will surely be missed by all of us. Curly and him are back together in the best place of all. Some day we'll see them again, but until then I'll have a couple more shots in both our Dad's memory.
Sincere condolences,
Ken
Comment Share
Share via:
SY

Posted Jan 08, 2020 at 04:18pm
Sandy and Randy,
The stories you told of how active your father was even in his 90's is a great tribute to how much he must have loved life. May you and your family find comfort in the cherished memories you have of him.
Comment Share
Share via:
EE

Posted Jan 08, 2020 at 12:25pm
Herb was a great guy and upbeat right until the end. Always fun to see him at the "Y" and discuss the deer population in my back yard. He used to hunt in a blind on John Heyl's property and I often saw Herb when out walking. I used to kid him about having a T V and bar in his shack. We'll all miss him!
Ed Eisele
Comment Share
Share via:
HS

Flowers were purchased for the family of Herbert Reimers.

Posted Jan 07, 2020 at 08:51am
Mom and I were entirely shocked to here of Herbs recent passing! What a wonderful man who lived an amazing life! So grateful we were able to spend Christmas day together and share in some special quality time. Our thoughts and prayers are with all of you as he will surely be missed by so many whos lives he touched in a most blessed way! He's certainly in a good place with God and Jesus in heaven with Curly and all those whom have passed before. Love Noreen and Nora
Comment Share
Share via: 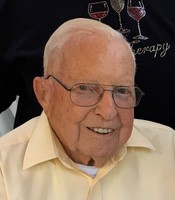