To share your memory on the wall of Henry Richmond, sign in using one of the following options:

Hank was born on January 1, 1947 in Charleston, WV to the late Henry and Irene (Diefenbach) Richmond. Hank grew up a proud Texan in the cities of Port Arthur and Beaumont, Texas. He loved being a Boy Scout, earned Eagle Scout, and played any sport he could, including baseball, football, wrestling and basketball. His parents were devoted to Hank and his brother John. When his Father’s work took the family to Chicago, Hank made new friends through sports and academics, excelling in both. Upon graduation from Lyons Township High School in 1965, he was nominated to the United States Military Academy at West Point.

Hank was a member of West Point’s “Black Knights” Army Football team as a defensive end and fullback. Significantly, his Army team beat Navy in 1966 and 1968, and tied them in 1965. Hank loved military training even more than academics, and became an Infantry officer upon graduation in 1969. Hank served in combat in Vietnam, where he worked with a South Vietnamese Army infantry unit as an advisor.

Hank met his wife Patty in Munich, Germany in 1975. He was an A team leader in the U.S. Army 10th Special Forces Group, Bad Toelz, and Patty was an Army communication specialist in Neu Ulm. They married in 1978 and traveled throughout Europe while moving from post to post in Germany. He served his last ten years in uniform at the Pentagon, then served 12 more years there as a civilian contractor for the Army and the Secretary of Defense.

Upon retirement in 2007, Hank was brought to Michigan by Patty, who grew up in Benton Harbor. He quickly made friends again, with veterans, golfers and Lions. Heart surgery did not slow him down very much. He traveled across America and several times to Europe. He has been a proud member of Lest We Forget, and spent his last day in his favorite way — having breakfast with his buddies, attending the monthly Lest We Forget meeting, and getting a haircut. He lived completely, right to the end.

A Celebration of Life memorial service will be held on Saturday-Dec. 14, 11:00 A.M. at Starks & Menchinger Funeral Home. Visitation is on Friday at the funeral home from 5:00-8:00 P.M. Memorial contributions may be made to Lest We Forget – SW Michigan at www.lestweforgetswmi.org Friends wishing to leave the family a message of condolence may do so at www.starks-menchinger.com
Read Less

We encourage you to share your most beloved memories of Henry here, so that the family and other loved ones can always see it. You can upload cherished photographs, or share your favorite stories, and can even comment on those shared by others.

Posted Dec 11, 2019 at 03:33pm
Hank epitomized what West Point instills in us and what we strive to do: cheerful, selfless, impressive dedication to others. I had the good fortune to talk with Hank during our 50th reunion. I was amazed at his positive attitude, the confidence that he showed despite his medical challenges and his numerous contributions to his community. He was at peace with himself and a role model of someone who continues to contribute wherever he may be and however he can.
We offer Patty our deepest condolences and prayers.
Bob and Marianne Ivany
Comment Share
Share via: 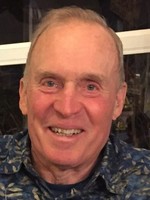