To share your memory on the wall of Harold Wilson, sign in using one of the following options:

Graveside services will be held at a later date at Hamilton Cemetery in Decatur. Memorial donations in Haroldâ€™s name may be made to the Wounded Warrior Project. Those wishing to sign Haroldâ€™s Memory Book online may do so at www.starks-menchinger.com.

Harold was born April 11, 1965 in South Bend, Indiana to Harold M., II & Jerri (Squires) Wilson. The family moved to Dowagiac where he graduated high school in 1983. Harold went on to earn his bachelorâ€™s degree from Western Michigan University. Harold proudly served his country in the US Army, stationed in Germany. On October 7, 1995, he married the former Jamie Elkins in Dowagiac. Harold worked as a substitute teacher in several districts around Southwest Michigan. He served as associate pastor at Freewill Baptist Church in Dowagiac, as the youth pastor at Safe Harbor Church of God of Prophecy in Sodus, and most recently worked as the night auditor at Best Western Hotel in Benton Harbor. Harold enjoyed writing and drawing, and wrote, illustrated and published four books. Harold attended Bright Star Tabenacle in Eau Claire and in his free time, enjoyed crafting jewelry, rooting for the Detroit Lions, and watching NASCAR, rooting for Dale Earnhardt Sr. & Dale Jr.

Receive notifications about information and event scheduling for Harold

Print
Private Graveside Services will be held at a later date at Hamilton Cemetery in Decatur, Michigan Memorial donations in Harold's name may be made to the Wounded Warrior Project.

We encourage you to share your most beloved memories of Harold here, so that the family and other loved ones can always see it. You can upload cherished photographs, or share your favorite stories, and can even comment on those shared by others. 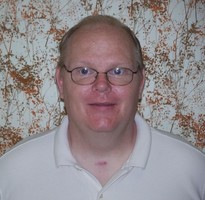