To share your memory on the wall of Geraldine Dent, sign in using one of the following options:

Gerry Dent was the older of two siblings born to Myron and Violet Stover in Berrien Springs. Like nearly every child in the area she was delivered by Dr. Warren Smith, who coincidentally delivered her father as his first baby. She spent much of her younger childhood watching her father Myron play baseball for the House of David or accompanying him on trips to local farm animal processing. Gerry worked in the family grocery store on Main and Ferry helping her mother after school. She attended Berrien Springs schools where she met her husband George Dent. After his discharge from the Navy they announced their engagement in January 1947 and were married on November 9th in the Berrien Springs United Methodist Church.

Like most newlyweds, their early years were lean and to supplement their income Gerry taught dance in the area. She played the piano while working with the classes as well as instructing both toe and tap. Part of a generation that could do anything she helped George build their first house on Michigan Ave in Berrien Springs. The "kit" arrived in a boxcar which they transported in a borrowed truck to the site. Gerry worked as the gopher bringing lumber to George as they built their first home.

When both children were in school Gerry began to volunteer at the Berrien Springs Middle School library. She enjoyed working with the children and helping them learn new things. Gerry worked with all grades including the special needs children to create a friendly environment. After several years she was made librarian despite not having a degree. When the family later moved to Hart, MI she continued volunteering at the Hart Public Library.

In retirement Gerry and George became snowbirds traveling between Michigan and Florida when the weather turned cold. Gerry made many close friendships in the 25 years they wintered at Camp Florida in Lake Placid, FL. In early retirement they surprised friends and family by becoming members of the Good Sam Club and touring much of the US in their motorhome. Gerry often got lost returning to Michigan in the spring, conveniently ending up in California to visit their errant son.

Gerry’s life encompassed many things but mostly family. Family was always important to her and as a mother she always put her children and husband before herself. She wasn’t afraid to give to others expecting nothing in return. If you were to sum up Gerry’s life in one word it would be kind. And that is a wonderful way to remember her.
Read Less

Receive notifications about information and event scheduling for Geraldine

We encourage you to share your most beloved memories of Geraldine here, so that the family and other loved ones can always see it. You can upload cherished photographs, or share your favorite stories, and can even comment on those shared by others.

Posted Sep 26, 2020 at 10:28pm
As a volunteer at WT, I had the privilege of spending several Saturday afternoons with Gerry. Such a sweetheart! I am so sorry for your loss. Denise Taylor

Posted Sep 25, 2020 at 08:56pm
Gerry’s room was across from my mom’s (Vera Walther) at Woodland Terrace and they shared the same dining table so I got to know Gerry some. She was a lovely person; maybe she and mom are chatting away again in heaven.
Comment Share
Share via: 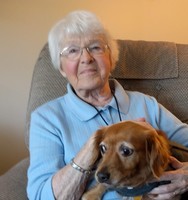