To share your memory on the wall of Gerald Wahl, sign in using one of the following options:

After graduating from St. Joseph High School in 1953, he continued his education at Benton Harbor Community College. He worked at Gardner’s Sporting Goods during his high school and college years which he dearly loved! He spent a few years in the insurance business before starting his own company, Wahl Laboratories. He was appointed a Trustee in Lincoln Charter Township and was later appointed Treasurer, a post which he held for 30 years until his retirement in 1996. He truly loved the people of Lincoln Charter Township and was honored to work with such amazing co-workers and friends!

He was actively involved in his community, serving on countless committees and boards. He considered it a privilege and honor to serve his country and the people of the communities in which he lived. He always upheld the values of trust, honesty and integrity in every leadership position he held. He served in the United States Army from 1957-1963. He was a charter member of the Lakeshore Jaycees and served as President where he worked tirelessly to serve his community. He was humbled to be named Outstanding Leader in Michigan and one of ten Outstanding Leaders in the nation. In 1967, he was named as one of the Outstanding Young Men of America. He was a member of the Lakeshore, Buffalo, and Clinton, Missouri Rotary Clubs where he held perfect attendance for 32 years. He received the Paul Harris Fellow recognition from the Lakeshore Rotary Club. When he joined the Buffalo Rotary Club, there were four members. He was very proud to have helped build that organization to over 35 members prior to moving to Clinton. He was also on the Blossomtime Committee and served as Chairman for the Key to the Cities Tour. He emceed several pageants and enjoyed announcing football and basketball games at Lakeshore High School. He was known as the “Voice of the Lancers.”

Upon retirement, he and Jan moved to Missouri with a dream of raising buffalo. He loved sharing his “farm” with friends and family. They named it Cherokee Ridge and it was one of the highlights of their retirement years. Together, they spent precious moments with their kids and grandkids and friends who visited along the way. Gerry especially loved watching his grandkids sled down the hills and fish in the pond. He also enjoyed pushing them in the treetop swing and giving them rides on his tractor! In later years, he enjoyed watching their sporting events and activities. His love for his family was beyond measure. He left a huge footprint on this world and in the hearts of his family and friends.

Gerry is survived by his wife, Jan, of 61 years; sons, Brian Wahl and Bradley (Megan) Wahl; and daughter, Karen (Mike) Rellihan; brother, William (Angie) Wahl; six grandchildren: Lauren, Adam and Gabrielle Rellihan and Taylor, Victor and Breelyn Wahl; and several beloved nieces and nephews. He was preceded in death by his parents and his brother, Jack Wahl.

A celebration of life in his honor will be held Saturday, July 25 from 2:00-5:00 pm at Santaniello’s Glenlord Restaurant & Pizzeria in Stevensville. We would love to have you join us. We do understand it is difficult to gather during these uncertain times, so please do what you believe is best for you.

Donations may be made to:

As a memorial, the family is planning to have a park bench built along a trail in Lincoln Charter Township for all to enjoy.
Read Less

Receive notifications about information and event scheduling for Gerald

We encourage you to share your most beloved memories of Gerald here, so that the family and other loved ones can always see it. You can upload cherished photographs, or share your favorite stories, and can even comment on those shared by others.

Posted Jul 16, 2020 at 02:21pm
I met Jerry Wahl in 1964 when he was with the Lakeshore Jaycees, perhaps as President. He and the Jaycees started the local Junior Miss Pageant, a scholarship program for high school senior girls. I was proud to represent Lakeshore, Michigan, and eventually America in that pageant in 1965. Thank you, Jerry and Jan, for taking that first step into a new program, that ended up benefitting so many local girls.

Though we haven't been in touch in decades, I will always treasure those memories. Obviously, Jerry continued to be a "go-getter," not content to remain on the sidelines. He also continued to be the truly dear and nice man I remember when I was 17. Jan, I send my sincerest condolences to you, your children and extended family. I am proud to have known you both.

Posted Jul 10, 2020 at 01:10pm
It was a joy to know and work with Gerry when he was on the Joint Board of Commissioners. God bless Gerry's family.
Comment Share
Share via:
GK 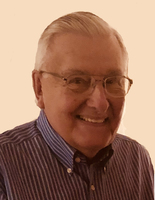