To share your memory on the wall of Gerald Pullins , sign in using one of the following options:

A private family graveside service will take place at a later date. Interment will be at Lincoln Township Cemetery. Memorial contributions will take place at Stevensville American Legion Post 568, 3093 Johnson Rd., Stevensville. Those wishing to leave an online condolence may do so at www.starks-menchinger.com.

Jerry was born on July 23, 1935, to Leonard & Lucille (Huff) Pullins in Dowagiac. He graduated from Benton Harbor High School and then proudly served his country in the United States Air Force before he was honorably discharged. On June 5, 1957, Jerry married the love of his life Josefine Lenhart in Germany.

Jerry worked as a Manager for National Foods Grocery Store for over 30 years until the stores closed. He then worked as an Inspector for Gast Manufacturing for over 15 years before he retired. Jerry was a member of the Stevensville American Legion Post 568 and had a passion for hunting and fishing. Jerry was a loving father, grandfather and great-grandfather and he loved to spend his time with his family.

Receive notifications about information and event scheduling for Gerald

We encourage you to share your most beloved memories of Gerald here, so that the family and other loved ones can always see it. You can upload cherished photographs, or share your favorite stories, and can even comment on those shared by others.

Posted Jan 02, 2021 at 02:46pm
Dear Pullins Family,
I was so sorry to read of your father's passing. Your dad and mother were good friends of my mom and dad (Gene and Madonna Schoenfelder) and shared many good times together. My mom also worked with your dad for many years at National. Your parents were very kind, lovely people and I am sure will be missed by family and friends. You have our prayers and thoughts at this time.
Louie and Donna Godush
Comment Share
Share via:
KZ

Posted Dec 30, 2020 at 03:24pm
I worked with Jerry at Gast and he was one of my favorite coworkers! I’m so sad to hear this news. My thoughts and prayers are with his family.
Comment Share
Share via:
JG

We are so very sorry for your loss! He was a wonderful man and we loved being around him! His smile and laugh, I will never forget! Please know that you are in our thoughts and prayers and that we will be thinking of you during this difficult time! Love Always, Jacquie and John Godush 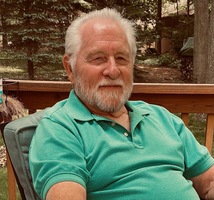