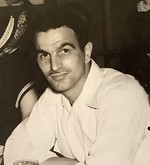 Fiore Francis Postelli, 101, of Coloma passed away Monday, May 25, 2020 in Grand Junction, Michigan. There will be a memorial service held at a later date. Arrangements have been entrusted to Starks & Menchinger Chapel & Cremation Services.

Fiore liked to fish, play cards, camp, travel and square dance. He picked up fruit from some generous local farmers and delivered it to senior centers and homebound senior citizens.

Those wishing to leave an online condolence may do so at www.starks-menchinger.com.