To share your memory on the wall of Eveline Struble, sign in using one of the following options:

Print
Eveline “Lynn” Struble, 91, of Millburg, passed away, Monday, December 9, 2019 at her daughter’s home in Coloma.

A Celebration of Life Service will be held 1:00 P.M. Friday at Starks & Menchinger Chapel, 2650 Niles Rd., St. Joseph, with Rev. Ron Hayes officiating. Burial will follow at Riverview Cemetery, St. Joseph. Friends may visit with the family from 5:00 until 7:00 PM. Thursday at the funeral home. Memorials in Lynn’s name may be made to the family, c/o Sally Gilson. Those wishing to sign Lynn’s Memory Book online may do so at www.starks-menchinger.com.

Lynn was born December 19, 1927 in Nottingham, England to Walter & Phyllis (Taylor) Hackett. She completed her schooling in England, and on May 28, 1945, she married Raymond E. Struble in Nottingham. The family returned to the United States and settled in Millburg where Lynn devoted her life to raising and caring for her six children. She was a member of Millburg Christian Church and looked forward to Bible Study every Thursday with her friends Carol Fowler, Sandy Drumm & Debby Wicinski. She enjoyed being outside taking in the beauty of nature. Lynn would visit her son & daughter-in-law, Dennis & Mindy, and simply sit in the flower garden taking in the beauty & smells while talking for hours with Mindy. Lynn also enjoyed sewing, knitting, baking, car rides (especially during the Christmas season), tending to her flower gardens, and most of all the time spent with her family, especially her grandchildren.

We encourage you to share your most beloved memories of Eveline here, so that the family and other loved ones can always see it. You can upload cherished photographs, or share your favorite stories, and can even comment on those shared by others.

Flowers were purchased and a memorial tree planted for the family of Eveline Struble. 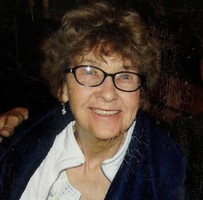