To share your memory on the wall of Eugene Wolff, sign in using one of the following options:

A Celebration of Life Service will be held 3:00 P.M. Thursday, April 1, 2021 at Starks & Menchinger Chapel, 2650 Niles Rd., St. Joseph, with Deacon Ed Nickel officiating. Friends may visit with the family from 5:00 until 7:00 P.M. Wednesday at the funeral home. Memorial donations in Gene’s name may be made to Central County Senior Center in Berrien Springs or Caring Circle Hospice. Those wishing to sign Gene’s Memory Book online may do so at www.starks-menchinger.com.

Gene was born March 12, 1939 in Bolimow, Poland to Edward & Lydia Wolff. The family moved to the United States and Gene graduated from Goshen High School, Class of 1958. He attended Lake Michigan College and Gene earned his tool & die certification. On February 10, 1962 he married the former Janet Hunter in Ligonier, Indiana. Gene was employed for nearly forty years as a tool & die maker at Wollin Products in Stevensville, retiring as plant supervisor in 2000.

Gene was a member of the St. Joseph Kickers Club where he played soccer and volunteered his time helping with maintenance. He was very handy and a jack of all trades, there wasn’t anything he couldn’t fix. Gene was an avid sports fan and enjoyed following most of the different sports, but especially his children’s and grandchildren’s sporting events. NASCAR was his favorite American sport and he enjoyed following Dale Earnhardt Sr. & Dale Jr. Gene was an avid dancer, he knew all of the different steps from country dancing to line dancing to polkas & waltzes. He cherished the time he spent dancing with Janet until the very end.

Receive notifications about information and event scheduling for Eugene

We encourage you to share your most beloved memories of Eugene here, so that the family and other loved ones can always see it. You can upload cherished photographs, or share your favorite stories, and can even comment on those shared by others.

Posted Apr 12, 2021 at 04:44pm
We were so sad to learn that Gene had passed away. We didn't know until this past Sunday, or we would have come to the visitation and funeral.
We sure miss his smile and upbeat personality.
You need to add helping out at the Soup Kitchen with S.U.M.C. to the long list of ways Gene helped others.
Keeping you all in our prayers.
Jerry & Sherry Hunt
Comment Share
Share via:
I

Posted Apr 04, 2021 at 02:47pm
Sadness fills our hearts at Gene's passing. We have lost a dear first cousin whose smile and good nature will shine on in our memory of him. We enjoyed many visits whenever we planned a trip to Michigan. Janet, you and your family are in our prayers. Draw strength from all that you were to Gene and all that he was to you.
Comment Share
Share via:
RH

Posted Apr 01, 2021 at 09:23am
I worked with Gene for 30 years at Wollin Products. He was one of the nicest, kindest people I have ever met, always willing to lend a helping hand to anyone who needed it. He was always smiling, I don't think I ever saw him in a bad mood, I will always remember the time my vehicle started acting up on my way to work one morning. It was spitting and sputtering and I didn't think I was going to make it up the hill on Glenlord between Cleveland and Red Arrow Hwy. Gene took a look at it, figured out what was wrong, and then on his lunch hour, he picked up the parts needed to fix it and did just that. I never had to ask him. He saw the need and he filled it. And he refused to let me pay him for his help. He made me want to become the kind of person he was. And that is only one example of his kindnesses to so many people. The world is a sadder place with him gone.
Comment Share
Share via:
BA

Thank you for sharing that JoAnne. That was my Dad, always willing to help. He could fix anything. Barb (Wolff) Antonucci
L

Posted Mar 31, 2021 at 08:21pm
What a great loss.. Gene was an outgoing personality, sweet, had a great laugh, and an all round terrific friend. We will always miss him ! All our best to you, Janet. Wish we were home to give you hugs ! You chose a perfect picture, it looks as though he could speak to us. Love you ! Sherry & Lou Cantrell
Comment Share
Share via: 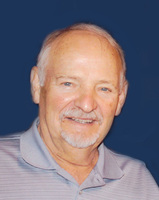